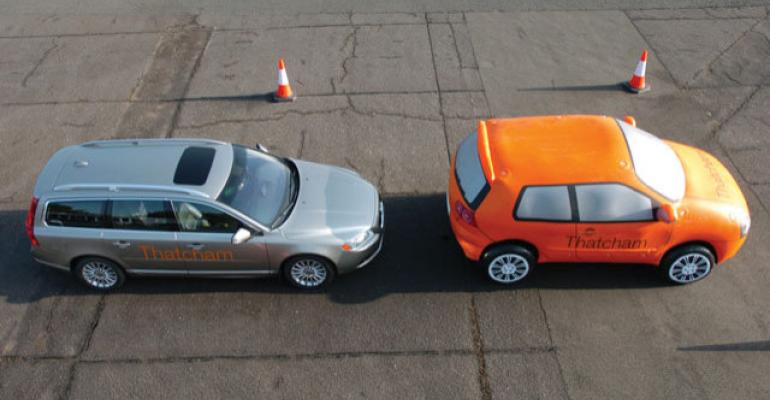 Supporters say the simplest form of AEB sensor, enabling a Lidar-based system found on the likes of the Volvo V40 and Mazda3, could cost manufacturers as little as &pound;40. More advanced systems could cost no more than &pound;200.

There’s a new drive to have all new cars in the U.K. fitted with autonomous emergency braking.

Thatcham says in a statement 41% of cars on sale in the region last year had AEB available, but only 17% had it as standard. The remaining 24%, offered it as an option, but only 2% of buyers chose it.

An earlier Thatcham survey found 82% of consumers say they expect safety features such as AEB to be a given on all new cars, not an extra.

“There is no longer any excuse for car makers to launch new cars without AEB as standard across the board,” Thatcham Director of Research Matthew Avery says in a statement.

“Where it is an extra, car manufacturers and dealerships, need to promote and explain the benefits of potentially lifesaving technology like AEB more effectively to consumers.”

Thatcham says the simplest form of AEB sensor, enabling a Lidar-based system found on the likes of the Volvo V40 and Mazda3, could cost manufacturers as little as £40 ($58).

More advanced radar and camera-based auto-braking systems, which provide additional functionality including the ability to avoid pedestrians and other vulnerable road users, have unit costs still likely to be under £200 ($290).

The effectiveness of AEB has been recognized by U.K. insurers, with the standard fit system typically resulting in a premium reduction of about 10%. “Not only will (it) reduce insurance premiums but give peace of mind for motorists by significantly reducing crashes and associated injuries,” Avery says.

Editorial Director Jim Holder says the evidence is irrefutable: AEB saves lives. “Just as all new cars now come with stability control, so autonomous emergency braking should be standard fit for all mainstream cars,” he says in a statement.

He notes the Euro NCAP vehicle-safety testing program, is offering higher safety scores as an incentive for automakers that make it compulsory.