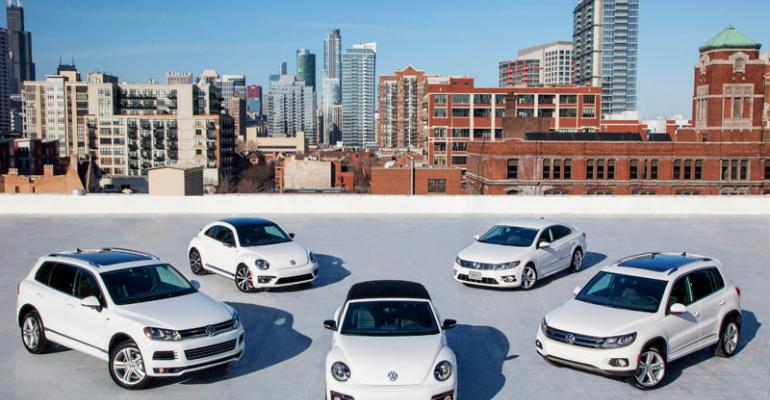 The German auto maker is counting on a new 1.8L engine, a proliferation of R-Line sport models and other tweaks to its &rsquo;14-model lineup to help maintain U.S. sales momentum while it awaits key product introductions planned for next year.

ST. HELENA, CA – Volkswagen of America is looking to survive a bit of a new-product lull for the VW brand in ’14 by bolstering its lineup of R-spec models, leaning heavily on its new TSI engine and rolling out an advanced telematics system across nearly every model line, executives say.

VW has been building volume steadily in the U.S. since 2009, with sales last year reaching a record 438,133 units, according to WardsAuto data. But so far in 2013, with a dearth of all-new product packing showrooms and some models completing their runs, deliveries have slipped 1.3% in a market that is up 8.4% overall.

Chief Operating Officer Mark McNabb noted earlier this month the performance was not unexpected, and that VW knew 2013 would be a “year of consolidated growth” as a result of the wind-down of the current-generation Golf and expiring Routan minivan.

Executives predict momentum will build in the latter half of 2013 and the year will finish on par with 2012’s volume, while the auto maker is sticking with its longer-range Mach 18 game plan calling for U.S. sales to nearly double to 800,000 units annually in 2018.

“When you’re running that strong, there’s a need to pause and take a breath,” Marc Trahan, vice president-quality, says of the VW brand’s recent sales curve during a backgrounder here on the’14-model lineup. “We’re in that phase now.”

But with the new-generation Golf not due until next year, and key products such as the Jetta and Touareg in their final go-around before scheduled facelifts, VWA is hoping to bridge the gap to ’15 with a series of more modest tweaks designed to entice buyers.

Topping the list of attractions is the new 1.8L direct-injected, turbocharged 4-cyl. gasoline engine that eventually will replace the naturally aspirated 2.5L 5-cyl. across VWA’s lineup, beginning as an upgrade option in the Jetta and Passat and rolling out in the Beetle later in the model year. The new 4-cyl. is the third-generation version of VW’s EA888 line that includes the 2.0L TSI that bowed in the ’13 Beetle and Jetta GLI.

The engine, in production at VW’s recently christened Silao, Mexico, plant, matches the outgoing 2.5L with 170 hp, but outperforms it in nearly every other category. That includes fuel economy, which increases 3 mpg (1.2 km/L) to 29 mpg city/highway (8.1 L/100 km), and low-end torque.

The auto maker also will broaden its portfolio of R-Line models beyond the current CC. For ’14 the sport-trim and equipment package will be an added option for the Beetle coupe and convertible, as well as the Tiguan and Touareg cross/utility vehicles.

The take rate for the R-Line option has been running about 20% on the ’13 CC, and Kevin Joostema, general manager-product marketing, expects that pace to hold for the outgoing Touareg model as well. The option package will be available on the flagship CUV with both the gasoline or diesel V-6.

The Tiguan R-Line, which comes with the 2.0L TSI engine, likely will see orders at a less than 20% share of total volume, Joostema says. The Beetle take rate will run higher, because all Turbo models, also with the 2.0L TSI, now will carry the R-Line treatment and badging.

VW is hoping to further boost interest in the Beetle with the special-edition GSR that harkens back to a 1970s race version of the model. In bumblebee yellow with black graphics along the side and atop the hood, the limited-run Beetle is powered by the 2.0L TSI engine. Output will be held to 3,500 units worldwide, with 1,900 of those earmarked for the U.S.

Further broadening the lineup, a new Passat Sport model will be introduced later in ’14.

Buyers who purchase vehicles with the system will receive the service free for six months. After that, subscriptions run $17.99 for a month, $199 for a year and $540 for three years.

Volkswagen to Debut Electrified Golf, Up! at Frankfurt Show
Aug 28, 2013