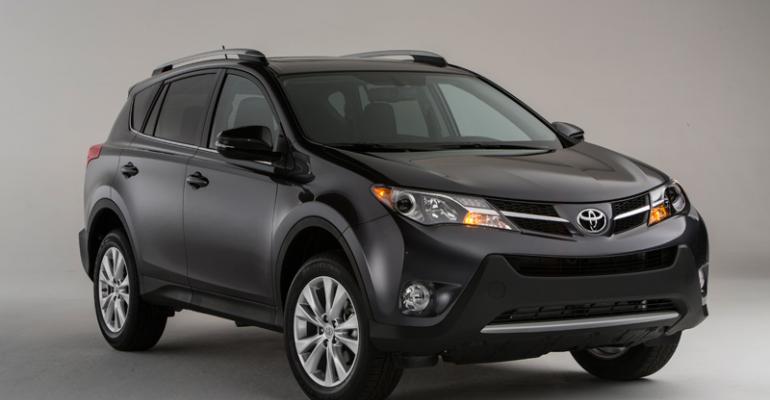 Fuel economy, styling and cargo capacity among upgrades for the &rsquo;13 RAV4, which loses the prior generation&rsquo;s V-6 engine and side-hinged rear door.

The next-generation of Toyota’s best-selling RAV4 cross/utility vehicle debuts at the Los Angeles auto show ahead of its early 2013 sales launch.

The RAV4, which helped usher in the small car-based utility vehicle craze in 1994, drops its V-6 option for ’13 and goes all 4-cyl.

Toyota replaces the current-generation RAV4’s 4-speed automatic with a 6-speed unit, which has its low gears optimized for around-town driving, Toyota says. For improved fuel economy at highway speeds, both fifth and sixth speeds are overdrive gears.

For ’13, new drive Eco and Sport drive modes are added, the latter sharpening throttle response in FWD and all-wheel-drive models. In AWD models, Sport automatically sends up to 50% of engine power to the rear wheels.

As with most new models, Toyota CEO Akio Toyoda directed designers to push the envelope.

The auto maker describes the RAV4’s exterior styling as “sophisticated,” with a “sleek” roofline and an “aggressive” character line.

A big change for the new CUV is the move from a side-hinged rear door to a traditional roof-hinged liftgate. On Limited grades, a 1-touch power liftgate with driver-selectable memory height settings is standard.

Toyota describes the RAV4’s dash as driver-centric. Blue lighting is used on the dash panel and all gauges for a unified look.

Steering-wheel-mounted buttons for audio and Bluetooth are standard on all RAV4 grades.

XLE and Limited grades get premium bucket seats, and in the latter heated front bottom and back cushions are standard.

The cargo area is deeper and larger than in the current-generation RAV4, with a claimed class-leading space with second-row seats folded flat.

The ’13 RAV4 gets eight standard airbags, up from six in ’12 and a class-leading number, Toyota claims.

With Toyota’s production back on track following last year’s natural disasters in Japan and Thailand, U.S. RAV4 deliveries are up sharply from year-ago, with 145,103 sold through October, vs.106,800 units year-ago, WardsAuto data shows.