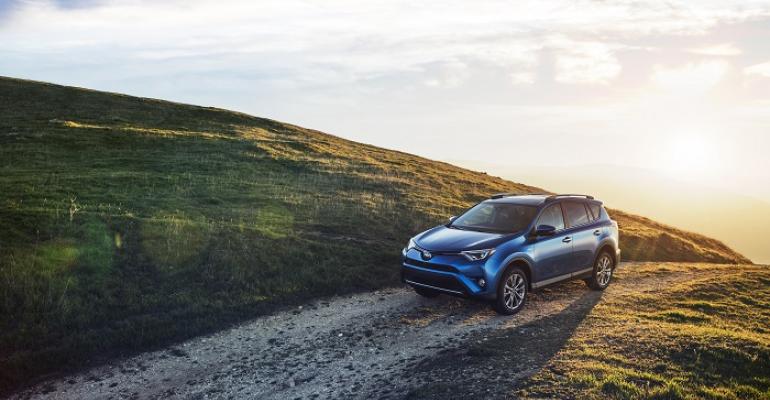 The new hybrid variant is part of the refreshed RAV4 lineup.

The new hybrid variant of the Toyota RAV4 CUV debuts today at the 2015 New York International Auto Show, ushering in a variety of updates to the vehicle for its mid-cycle refresh.

Toyota provides no specs for the RAV4 Hybrid powertrain but promises more horsepower and naturally higher fuel economy with the vehicle, which will come in XLE and Limited grades and go on sale this fall in the U.S. Standard across both hybrid grades will be electronic on-demand all-wheel drive, Toyota says.

Updates for ’16 to all RAV4s, Toyota’s best-selling CUV this year with 67,010 units delivered through March, include sleeker exterior styling, a bolder front fascia with available LED headlights, daytime running lamps and hi-lo headlights, as well as an entirely new rear bumper and liftgate with available LED taillights.

Most grades of the non-hybrid RAV4, which include LE, XLE, Limited grades and a new-for-’16 SE grade, receive a silver-skid plate garnish.

Prompted by customer feedback, interior updates to the RAV4 include improved materials, such as soft-touch on the upper and lower dash, a leather steering wheel on all but the LE base grade, new cupholders that better grasp tall mugs with handles and an available 4.2-in. (107-mm) multi-information display and 7-in. (178-mm) touchscreen.

Standard depending on the grade is front and rear parking sonar (Limited), Scout phone-based navigation (LE) and SiriusXM (XLE, SE and Limited).

The ’16 RAV4 will be first-to-market with Toyota's Bird’s Eye View Monitor, with four exterior cameras transmitting a panoramic view of a driver’s surroundings. An industry-first feature is said to be Perimeter Scan, with a live rotating 360-degree view of objects around the vehicle.

The new SE grade is in keeping with Toyota’s recent strategy of offering a more athletic variant of most of its models. A sport-tuned suspension, paddle shifters, SofTex faux leather seats and a black headliner and gunmetal finish on trim pieces are featured on the SE.

A 2-tone paint scheme will be available on the sportier RAV4, mixing a silver metallic finish on the lower portion of the body with either Super White, Black Sand Pearl or Electric Storm Blue paint on the upper body.

Those same colors, plus Blizzard Pearl, Magnetic Gray Metallic and BLUE will be available on the RAV4 Hybrid.