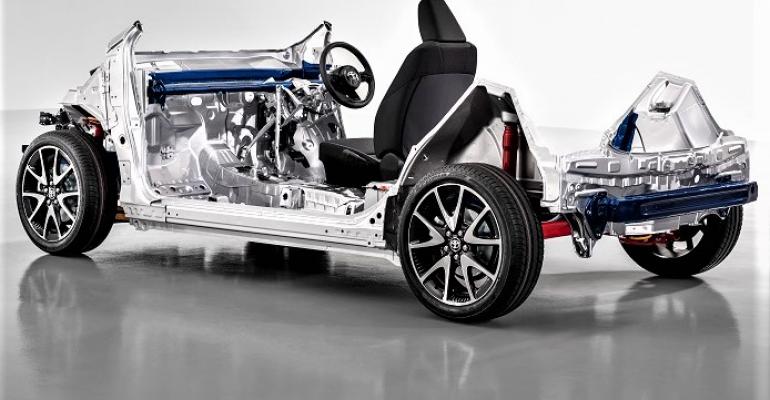 The move extends the reach of the automaker’s TNGA (Toyota New Global Architecture) platform into the small-car segment with the development of its new GA-B platform.

Toyota launches a new small-car platform for use in future products for global markets.

The move extends the reach of the automaker’s TNGA (Toyota New Global Architecture) platform into the small-car segment with the development of its new GA-B platform.

Its first TNGA platform appeared in 2015 with the current-generation Prius. The GA-C platform, for midsize cars, followed with deployment in the C-HR crossover and the new, U.K.-built Corolla. The concept also has been employed in larger sedans and SUVs, including the new Camry and RAV4, both of which are underpinned by the GA-K platform.

Toyota claims the new platform enjoys a highly rigid underbody using advanced techniques to strengthen joints in the structure, while at the same time focusing on weight saving and cost control. The MacPherson-strut front suspension features low-friction dampers and can accommodate various spring types. It also allows for either torsion beam or multi-link rear suspension systems to be used, according to vehicle type and character.

The GA-B platform places the driver’s seat low and back toward the center of the car, helping lower the vehicle’s center of gravity. Toyota claims this also will enhance the driving experience with the steering wheel placed closer to the driver and at the best angle for engagement.

Interior capacity was a major design requirement for the platform, which claims to make the most of the vehicle’s relatively small dimensions. Toyota says vehicle designers should have the freedom to give each new model a distinctive and individual appearance despite many standardized parts being used in concealed areas.

It also claims the platform allows for the vehicle’s hard points of the upper body and the driver’s hip-point to be set low, so there is more scope to create cars with a low roof height and wide stance. Wheels are positioned out as far as possible at the corners of the platform and its short overhangs should add to visual appeal, Toyota says.