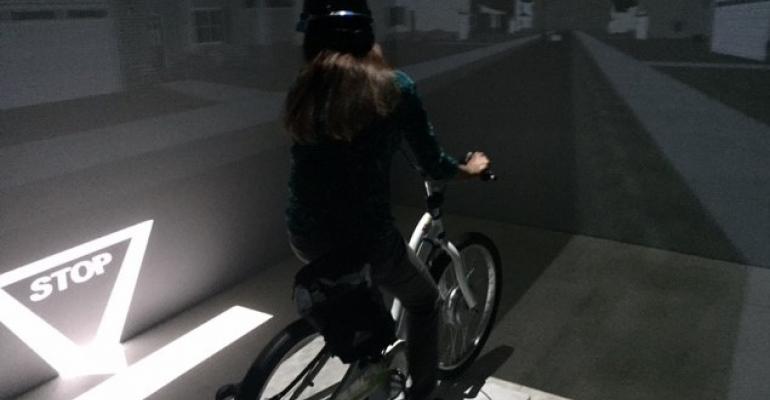 Toyota
Toyota-devised icon to be shone on roadway from car headlamp for bicyclist to see.
Vehicles

The automaker also has been at work helping to influence a test protocol for road-departure-mitigation systems that go beyond current road-edge detection.

YORK TOWNSHIP, MI – Statistics from the National Highway Traffic Safety Admin. show a pedestrian was killed in a traffic crash every 88 minutes in 2017.

NHTSA statistics show that the majority of those deaths happened during darkness.

With that in mind, Toyota is working to get new vehicle-based warnings approved to prevent these deadly incidents.

Via its Collaborative Safety Research Center near Ann Arbor, the automaker is hoping to influence rule-making in an effort to get such warning systems in market as soon as possible.

Rini Sherony, senior principal engineer-CSRC, is leading the research into the warnings, which would be projected from headlamps onto roadways near pedestrians and bicyclists.

“Currently (NHTSA’s) FMVSS (Federal Motor Vehicle Safety) regulation for headlamp doesn't allow those to be introduced in the market, because they have different patterns they're generating. So we have been lobbying from 2014 (to change the rule), and Toyota was the first one to lobby to change that regulation,” she tells Wards on the sidelines of a media event here.

The rule (FMVSS 108), which originated decades ago to prevent usage of potentially unsafe aftermarket headlamps on vehicles, also limits projections from headlamps onto the road.

Upon first lobbying, NHTSA didn’t want to change the rule, fearing icons projected onto pavement could distract drivers. But within the last year, thanks to data presented by Toyota and lobbying efforts by other OEMs, the rule-making organization is seeing the benefit. 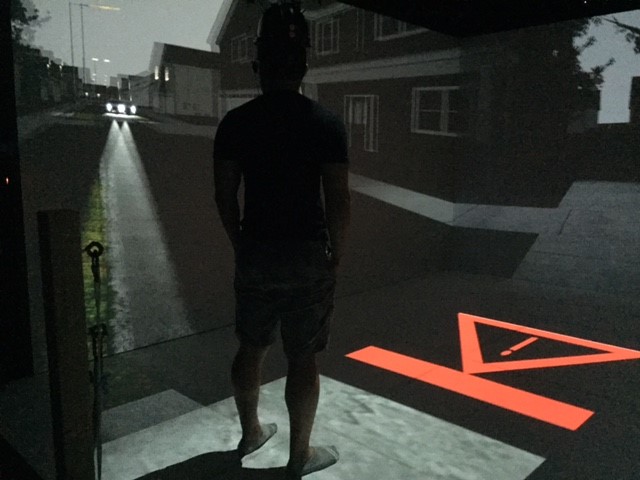 The CSRC worked with the University of Iowa to test these light projections with real bicyclists and pedestrians inside a simulator. Sherony says the subjects found the projections helpful and easy to understand, and that they helped make the vehicles more visible.

As with other safety-warning systems in vehicles, Sherony says NHTSA is not aiming to define what the icon looks like, so each OEM could develop their own unique design.

Once the regulation is approved, she is hopeful the projected warnings could be on vehicles within a few years.

Another part of Sherony’s recent research involves helping influence development of a test protocol for road-departure-mitigation systems by simulating the conditions of a typical U.S. roadside.

While Toyota already has a road-edge-detection feature coupled with lane-departure alert in its latest standard safety package in the U.S., Safety Sense 2.0+, that just detects the first point of exit, the road edge. To prevent exiting the road farther out, there is no standardized test in the industry.

“One of the goals for CSRC is to fill in gaps in the safety industry,” Sherony says, adding no one is yet developing roadside objects, or “surrogates” in industry parlance, not even Europe’s NCAP new-car assessment program.

Through the cluster analysis of 25,000 high-resolution images purchased from Google Street View, CSRC was able to determine the most common roadside elements in the U.S. It determined grass is the most common feature beyond the road edge, followed by concrete curbs, metal guard rails and concrete dividers.

But of course there is not just one type of grass along U.S. roadsides. Toyota developed 16 major clusters of roadside grasses to test.

“We found that different kind of grass patterns (and their) reflection characteristics to the sensors are different. So as a result, if you use only one type (of roadside grass), and don’t test with the others, you will not know how the system will perform in other situations.”

To devise the 16 surrogates, it used a polyurethane-based material to simulate real grass.

“And then we developed a unique combination of different paints, and we painted it in a specific direction, so that when the radar and lidar hits it, it gives it the same return as this (real) pattern, so we have 16 different surrogates for the 16 different grass patterns,” Sherony says.

Contrary to what many may think, most road departures occur in good weather, not the wintertime. Sherony theorizes this may be due to people paying more attention to their driving in snowy or icy conditions.

Crash reconstruction data for road departures shows many drivers don’t brake, but instead steer, causing their vehicle to re-enter the road at a high angle and then lose control, possibly hitting the other side of the road.

“That's why I think it’s important to know…what is the environment, so that we can take the majority of it and kind of construct something which is a representation of what is really happening. And sometimes what’s really happening is counterintuitive to what people usually think, what should happen or when it should happen,” she says.

Sherony and her CSRC colleagues presented the results of their research at a recent auto safety conference in Eindhoven, Netherlands, for a large global audience including several NHTSA representatives.

She says the research was well received, and that afterward a U.S infrastructure standardization group asked for help in developing better roadside object requirements to ensure AVs can detect them. A closed presentation for the working group is planned for next month.