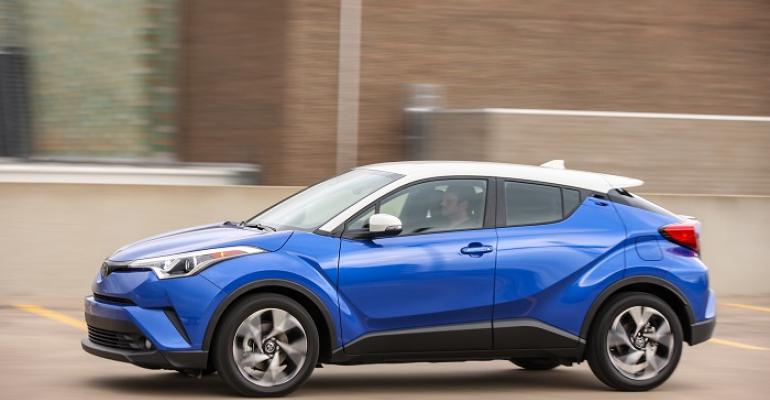 Toyota will be showing a small CUV concept at next month&#39;s New York auto show.

AUSTIN, TX – As it approaches the April launch of the new C-HR small CUV in the U.S., Toyota says it is studying a second model for the burgeoning segment.

“We might have something along that line (at the 2017) New York (Auto Show), if it shows up and the truck drops it at the right place,” Bill Fay, group vice president-Toyota Div., tells WardsAuto during an interview at a C-HR media preview here of a small CUV concept to be unveiled at NYAS.

Until recently, Jeep was the only brand with two small CUVs for sale in the U.S., the 2-year-old Renegade and the new Compass (Kia's new Niro small CUV joined the Sportage in the group this month), but the segment is growing at such a pace that there likely is room for more models, Fay says.

“There’s a lot of activity there. So I think everybody is looking at, ‘What’s the best way to meet that customer demand?’ I think we’re very well set up (with the C-HR and midsize RAV4 CUV), but we’re also kind of looking at what else could we be doing there if this continues to be a growing segment, which we anticipate it will,” he says.

Nissan kick-started the current small-CUV trend in 2010 with the launch of its Juke model, but the automaker, recognizing the Juke’s aggressive styling and taut suspension is not for everyone, has said it is exploring a more mainstream-looking and softer-riding small CUV for the U.S.

As WardsAuto first reported last year, Nissan is slated to bring its Kicks small CUV from Brazil to the U.S. It is unclear if the Juke will see a second generation and be sold alongside it. Nissan also will be selling a smaller version of the Rogue, the Rogue Sport, in the U.S.

The C-HR, which rides on Toyota’s compact TGNA platform, is similar in looks and driving character to the Juke, a possible reason – in addition to sales potential – for Toyota to explore a second small CUV in the U.S. Fay infers the New York show concept will err toward a mainstream audience.

Toyota expects annual U.S. sales of the C-HR, originally developed for Europe and first slated to come to the U.S. as a Scion, to tally 30,000 this year and 60,000 next year.

The No.1 Japanese automaker is targeting the Millennial or the “Millennial at heart” crowd with the C-HR, which Fay boasts “doesn’t look like anything we’ve ever produced.”

Deputy Chief Engineer Hiro Koba says the CUV is “for those who want to express their unique personalities in a vehicle,” adding style and dynamics were the main focal points during development.

The concave and convex forms of the C-HR’s sheetmetal, coupled with its coupe-like roofline, were seen as necessities, as was handling akin to that of sporty compact cars. Koba says the Volkswagen Golf was one of the models benchmarked during the C-HR’s development.

Fay says the hybrid variant of the C-HR available in Europe is being studied for the U.S., as are other European variants including an all-wheel-drive C-HR and a model with a small-displacement turbocharged engine.

“I think we’re considering a lot of different options,” Fay says. “There’s a lot of different ways we could potentially go. I think we’ve got a good setup to start and we’ll learn how the customer likes that and we can make some adjustments down the road depending on overall feedback.”