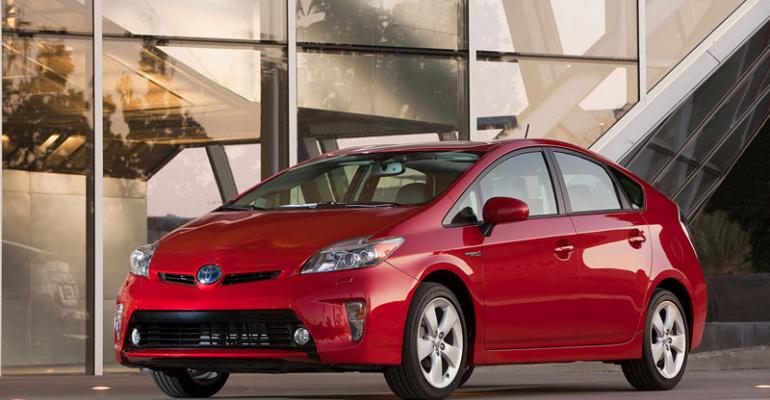 Toyota says collaborations with other auto makers like the one recently announced with BMW could speed its ability to meet government fuel-economy and emissions standards.

WASHINGTON – Toyota leads the pack in hybrid-vehicle sales and isn’t looking back.

Toyota and its Lexus luxury brand account for 65% of the U.S. hybrid market, says Tom Stricker, vice president-technical and regulatory affairs and energy and environmental research.

Total U.S. hybrid sales soared to nearly 500,000 units last year, and the Toyota brand captured 327,000 of that total. “We expect our overall volume to grow here, and we also expect hybrid- vehicle sales to grow,” he says.

Stricker, speaking during a panel discussion about affordable mobility prior to the Washington auto show, says Toyota’s Prius family of hybrids recorded 236,000 sales last year. The Prius was the top-selling car brand in California in 2012.

Cumulatively, 4.6 million Prius hybrids have been sold since its introduction in 2000, 1.8 million of those in the U.S.

Toyota says it will introduce 21 new or redesigned hybrid models by the end of 2015.

While hybrids will play a role in Toyota's plans to meet the 54.5 mpg (4.3 L/100 km) fuel-efficiency standard proposed for 2025, the auto maker is developing other concepts that could help to meet the target.

Stricker says collaboration with other auto makers, such as the recently announced agreement with BMW to co-develop fuel-cell vehicles, could speed Toyota's ability to meet the more stringent fuel-economy and emissions standards proposed by the government. It also could help lower the cost of manufacturing those future vehicles, he says.

Key U.S. Cabinet members such as Secretary of Transportation Ray LaHood and Environmental Protection Agency Administrator Lisa Jackson have submitted their resignations, but Stricker predicts their successors will carry out policies they have proposed.

More will be known about the 54.5 mpg fuel-efficiency proposal after a midterm review of the standard. “It could be completed before then,” Stricker says.

The Toyota executive predicts auto makers will create more turbocharged models and there will be further downsizing, along with evolutionary changes to existing internal-combustion engines.

“Cars will be quieter, safer and a little more expensive,” Stricker says, but notes they will remain affordable, as the number of work weeks it takes to buy a car has been dropping for some time and likely will continue. Above all, he says safety remains the first priority for auto makers.

Panelist Reg Modlin, Chrysler's director of regulatory affairs, says it will be important to find out whether consumers will pay for the new technology required to meet the forthcoming fuel-economy standards.

Modlin says auto makers are being challenged to get customers into electric vehicles, compressed-natural-gas-fueled cars and even diesels. “That's very tough in this market,” he says. Both Stricker and Modlin say hydrogen-fueled vehicles are still a long way off because there is minimal hydrogen infrastructure today.

Robert Bienenfeld, senior manager-environment and energy strategy for Honda, calls on the government to be technology-neutral when setting fuel-economy standards. The emphasis shouldn't be only on hybrids and EVs, he suggests.

“If we can accomplish goals with other technologies, that should be open to manufacturers,” he says.