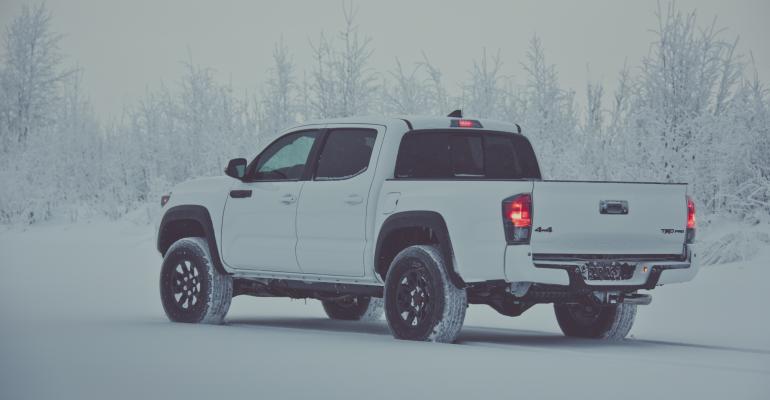 Based on the Tacoma TRD Off-Road 4x4 Double Cab Short Bed model, the midsize pickup will be powered by a 3.5L, 24 valve V-6 with variable valve timing.

CHICAGO – After a 1-year absence, the midsize Tacoma returns to Toyota’s TRD Pro lineup, catering to the serious off-road adventurer when it goes on sale this fall as a ʼ17 model.

The limited-edition midsize pickup that’s designed, as Toyota boasts, “to go where roads fear to tread,” was first offered for the ʼ15 model year after a Chicago Auto Show unveiling in 2014. But the TRD edition wasn’t offered for ʼ16 as Toyota chose to focus on bringing out the next generation of Tacoma to compete against the return of the new Chevrolet Colorado and GMC Canyon.

The ʼ17 Tacoma TRD Pro unveiled here will be factory equipped with a host of off-road features designed by Toyota Racing Development for the extreme off-road enthusiast, as well as folks Toyota describes as those “who challenge themselves and their trucks in some of the harshest conditions in places they never dreamed possible.”

Based on the Tacoma TRD Off-Road 4x4 Double Cab Short Bed model, the midsize pickup will be powered by a 3.5L, 24-valve V-6 with variable valve timing and come with a choice of either a 6-speed manual (with clutch start-cancel switch) or 6-speed automatic transmission.

The Tacoma TRD Pro also will offer a multi-terrain selector control to adapt the truck to travelling through snow, sand, mud and water, as well as up hills and along trails. It also has crawl control for maneuvers down steep paths.

The new Tacoma TRD Pro includes an analog instrumentation that features a 4.2-in. (10.7-cm) color display screen with an integrated inclinometer and tilt gauge.

As in all Tacomas, a GoPro camera mount is located on the windshield for serious off-roaders who like to document their exploits.

Toyota says it plans to only build 2,400 copies of the special-edition pickup.

Rick LoFaso, corporate manager-vehicle marketing, notes the significance of the pickup for extreme enthusiasts at Toyota, because more than 40% of buyers use the Tacoma for off-roading.

“Towing is 22nd on our customers list of reasons for buying a Tacoma,” LoFaso says. “When they do tow, it’s a motorcycle or an ATV.”

It is noteworthy that Ram also is using the Chicago Auto Show to unveil an off-road specialty pickup, its new ʼ17 Ram Power Wagon designed for enthusiasts who favor a fullsize pickup.