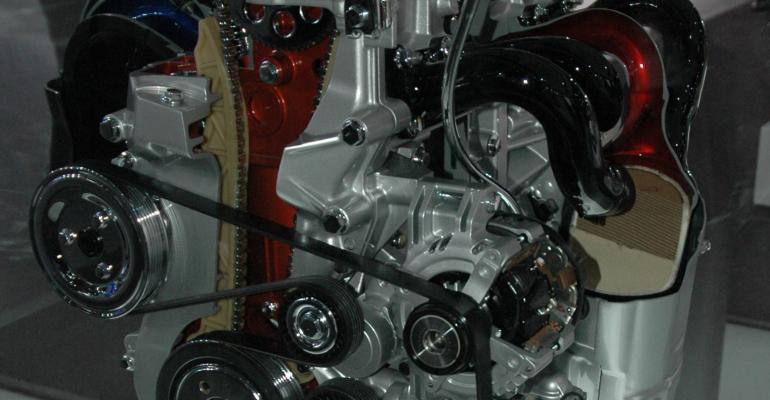 The legendary Hemi&rsquo;s history puts the V-8 family in a class by itself, but Chrysler watchers should not rule out the possibility that vehicles might someday feature Tigershark badges.

Once touted as Chrysler’s 4-cyl. engine of the future, the World Engine family has been replaced by the Tigershark engine family, which makes its debut in the all-new ’13 Dodge Dart C-segment sedan.

The Tigershark will take its place on the Chrysler mantle beside the Pentastar V-6 and Fiat FIRE  engine families. The legendary history of the Hemi puts the V-8 family in a class by itself, Bigland says, but Chrysler watchers should not rule out the possibility that vehicles might someday feature Tigershark badges.

The auto maker spurned alternative names from a list “as long as my arm,” Bigland says. Tigershark comes from the codename by which the engine’s developmental project was known inside Chrysler.

However, expect Chrysler to mention the name prominently in same manner Pentastar is used in marketing, Bigland says.

The new engine also is a telling barometer of Chrysler’s place within the Chrysler-Fiat alliance because it marks the introduction, along with the overseas-market Fiat Panda cross/utility vehicle, of the Italian auto maker’s latest version of MultiAir valve-actuation technology.

The Tigershark, which launches with displacements of 2.0L and 2.4L, is derived from the World Engine. But it borrows sparingly.

No more than 12% of their parts are common, says Bob Lee, vice president-engine and electrified propulsion engineering. “Our first objective was refinement; our second objective was fuel economy,” Lee tells WardsAuto.

Chrysler does not disclose fuel-economy ratings, saying that information will be released closer to the car’s second-quarter launch.

But the 2.4L Tigershark’s performance is expected to benefit from “MultiAir 2,” which optimizes exhaust-gas recirculation by leaving open the engine’s valves for longer intervals during the intake cycle.

Addressing the refinement issues that plagued the World Engine, “we had to go after that fundamentally; no Band-Aids,” Lee says.

Chrysler fits the Tigershark’s all-new cast aluminum block with a new forged steel crank and connecting rods and a redesigned bearing beam. The resulting increase in stiffness reduces unwanted noise, the auto maker says, along with an oil pan that has acoustic material between its inner and outer steel surfaces.

Most significantly, the Tigershark’s tubular exhaust manifold is moved to the front of the Dart’s engine compartment to further limit unwanted noise intrusion.

Lee chuckles when asked how much stress the Tigershark’s development placed on his engineers.

“This program was actually given the go ahead at the end of May 2010, and we’re in production now,” he says. “You know the routine.”

The dramatic scope of the program seems to fly in the face of Chrysler CEO Sergio Marchionne’s endorsement of the World Engine at last year’s Detroit auto show.

The World Engine “was not a disappointment,” he said at the time, describing it as a leading-edge solution in terms of 4-cyl. powertrains.”