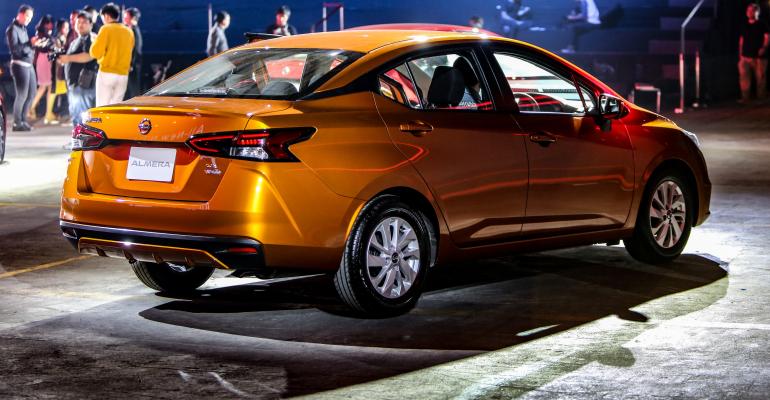 The Almera is a crucial model for Nissan Thailand as both the overall market and Nissan lose sales momentum this year.

BANGKOK – Nissan’s Almera debuts in Thailand, the first country in Asia and Oceania where the fourth generation of the sedan will be sold.

It’s the first car in Thailand’s Eco Car segment powered by a turbocharged engine, in this case, a 1.0L unit making 100 hp and 177 lb.-ft. (240 Nm) of torque. It won’t be on its own for long, though, as the seventh-generation Honda City also will come equipped with a 1.0L turbo when it launches here later this month.

The Almera is a crucial model for Nissan Thailand as both the overall market and Nissan lose sales momentum this year. The automaker staged an extravagant launch ceremony where a 60,280-sq.-ft. (5,600-sq.-m) warehouse was retrofitted out as “Almera Village” complete with shops, food, a piazza and test rides conducted on a surrounding apron.

Essentially the same as the U.S.-market Versa, this is the new model’s first appearance outside of the Americas.

The new Almera adopts Nissan’s “V-motion” grille design as well as incorporating a floating roof. A new dashboard and infotainment system are inside (below, left). It’s wider and longer than the outgoing model with what Nissan says is class-leading legroom and cargo space.

Ramesh Narasimhan, president-Nissan Thailand, has high hopes for the new Almera. “Other than the name, everything is new,” he says. “The design is exciting and confident…the technology is what you expect in a higher segment.”

Almera deliveries to Thai customers will start in the fourth week of December, while exports will kick off in 2020. Narasimhan doesn’t reveal export destinations but says the new model will be sold in more countries than the current Almera.

Narasimhan, who was named president in April following a stint with Nissan Philippines, is coming to grips with the future direction of the company. 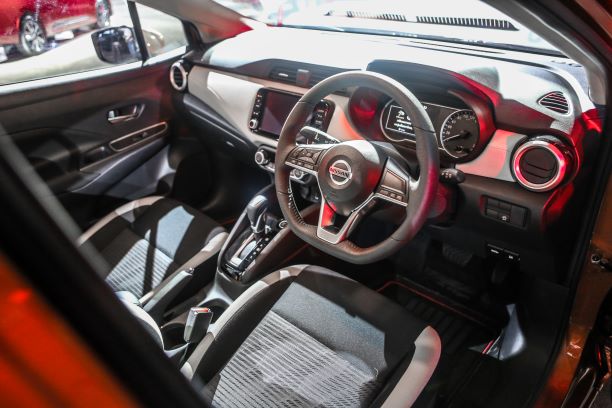 After a recent focus on launching the battery-electric Leaf, which will account for only a trickle of sales in the near future, the Almera represents a key bread-and-butter model that can boost volumes. “Almera is the start of the future,” Narasimhan says.

Unlike other brands that are considering tightening their belts as the new-car market slows, Nissan Thailand has moved to two shifts at the Samut Prakarn plant, which will produce the new Almera, and significant investments are being made.

Nissan Thailand has escaped unscathed from the parent company’s July announcement it would shed 12,500 jobs worldwide and cut capacity 10%.

Nissan is expected to assemble around 200,000 vehicles in Thailand this year across eight models, the bulk of those being the Navara pickup.