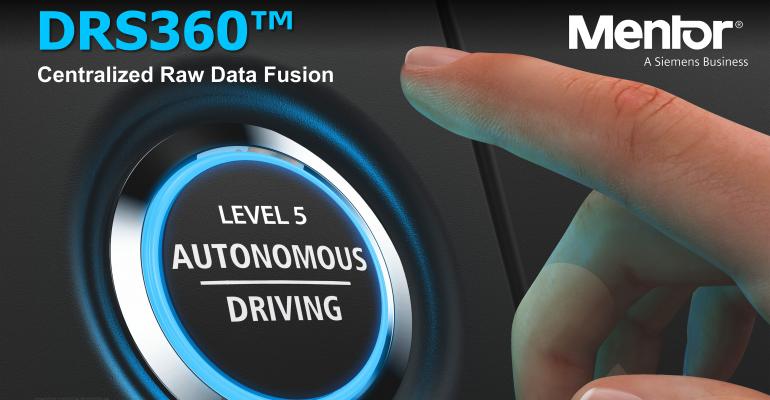 DETROIT – Mentor Automotive says it has the industry’s answer to Level 5 autonomous vehicles in a single box.

Its DRS360 platform is built around a central controller designed to take some of the complexity out of vehicle electronics architectures, reduce the brainpower needed at the sensor level and keep costs in check as automakers ramp up to full-scale autonomous driving.

Oregon-based software developer Mentor, founded in 1981 and acquired by Siemens in a deal closed only a week ago, isn’t alone in pitching the concept of “sensor fusion,” whereby software is used to intelligently combine sensor data to improve the performance of such advanced-driver-assistance systems as automatic braking, lane-keeping and throttle controls.

But executives say they believe the company is alone in taking a unique low-cost approach it calls “raw data fusion,” which uses simple, rather than smart, sensors to gather the data and a central controller to sort, combine and parse that information to ADAS controllers.

Mentor’s DRS360 technology pitch comes as the industry wrestles with the rising cost and complexity of today’s distributive data-processing architectures in the march toward fully autonomous vehicles that are expected to reach the market early in the next decade.

“We’re not sure you could use the existing (distributive data-processing strategy) and get to Level 5 (autonomy),” says Amin Kashi, Mentor’s director-advanced driver assistance systems and autonomous drive. “So we started with a clean-sheet approach to designing a system.”

Kashi says Mentor is conducting hardware tests on the DRS360 and expects to begin road testing the system in three demonstration vehicles later this year.

“We are already in discussions with some of the OEMs and mobility companies for future vehicles,” he says. “It’s been a stealth program for some time now, but this is the time we thought was right to talk about it.”

Mentor says its raw-data solution dramatically reduces operating latency because the simple sensors used aren’t pre-filtering the data before passing it along.

“We let the sensors do what they are supposed to do, just sense,” Kashi tells WardsAuto at the recent SAE World Congress Experience exhibition here. The data collected is processed by the central computer and shared with multiple ADAS actuators as needed.

“As trivial as it sounds, it’s extraordinarily difficult to do,” notes Mentor’s Glenn Perry, vice president and general manager-Embedded Systems Group. “You’re basically pumping raw data at a gigabit a second from the raw sensors. The data is coming in at different packet intervals and different sizes and different data types.”

Fusing that data in real time through one set of machine-learning algorithms is “a very difficult technical problem,” he adds.

Perry says 16 developmental patents have been filed on the DRS360’s design.

“It’s dramatically less computing power than you would otherwise need to process these ‛siloed’ individual sensor data streams that are preprocessed,” Perry says. “The compute time drops to almost 50%, our classification time drops from about 500 milliseconds to below a millisecond and our confidence in classification goes up over 90%.”

Microchip vendors might not like the fact that computing-power needs are reduced because they want to sell higher-powered, higher-cost products, Kashi notes, “but the OEMs we’re in discussions with love this architecture.”

The supplier says its DR360 platform not only eliminates all data bottlenecks and delays, but also provides headroom to expand as technology advances toward better processing and more sophisticated artificial intelligence.

Cost is expected to be less than today’s distributive-processing approach to ADAS, though Kashi declines to provide specific estimates, saying more work is needed to crunch the numbers based on volume.

“There will definitely be a price reduction versus what we see out there,” he says. “But we’re not just saving on the platform side; we’re saving on the sensors.”

That’s a less attractive prospect for sensor makers, which would prefer to sell higher-margin smart sensors to automakers, Kashi admits.

“You can imagine the sensor suppliers don’t have any incentive to do this because we are taking out the processing and making the sensors less expensive,” he says.

To that end, Mentor has reached out to some sensor suppliers to become potential application partners, including Sony, which has agreed to chip in with raw-data image sensors.

Kashi says the Mentor system could be plugged into existing vehicle architectures and wouldn’t require an all-new platform and clean-sheet design approach to make it into a production vehicle. Application also doesn’t depend on a commitment to full Level 5 autonomy.

“In terms of plug-and-play, you have an easier choice of sensors because all the communication is very simple,” he says. “The OEMs would need to bring in some of their own algorithms, but we provide the information they need.

“Even though this was targeting a Level 5 system, we always had in mind to have the system down-scalable for Level 3 and 2 and even 4,” Kashi adds. “And interestingly enough, those are the first engagements we are seeing. People want to use this architecture for those kinds of implementations, but then having the path to go beyond those levels.”

As for potential timing, Kashi says that is up to the OEMs, but adds automakers have been “very open about 2020-2021 implementation (for autonomous vehicles).”

Perry says Mentor’s big advantage over other lower-cost ADAS strategies, such as what he describes as more of a black-box approach from leader Mobileye, is the open architecture of the DRS360 that allows automakers to customize ADAS operations.

“The frustration is, if you’re an OEM and you have the same black box as the other guy (it’s impossible to differentiate),” he says. “We’ve opened our architecture up in terms of both hardware for integrating any number of sensors and types you like as well as algorithms that can be integrated from a third party or your own. So it’s a different approach from the gorilla in the market on ADAS.

“It’s going to be interesting to see how this evolves from here, but we’re enthusiastic,” Perry adds. “We’re looking forward to the first Level 5 platforms getting into production.”