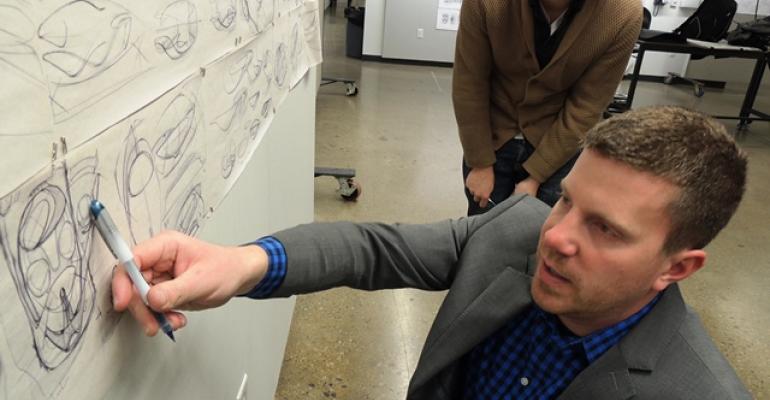 Students Envision Self Drivers for 2030

The assignment is to design the interior of a compact CUV or SUV aimed at active professionals who want a car that drives itself on daily commutes but who also want the option to physically drive in the country on weekends.&nbsp;

What will vehicle interiors look like far in the future? That’s the question we’ve been trying to answer for six years now with the help of talented students in the Transportation Design Dept. at Detroit’s College for Creative Studies.

Each year, the young designers have delivered projects that are fascinating, thought-provoking and fun. And many now have moved on to jobs at automakers and suppliers.

This year, we challenged students to create an autonomous vehicle for weekend driving enthusiasts that would debut in 2030.

It may sound contradictory, but we think that in 15 years a lot of consumers will want self-driving vehicles, but they won’t want to completely give up driving, at least when they are not bogged down in traffic.

The assignment is to design the interior of a compact CUV or SUV aimed at active professionals who want a car that drives itself on daily commutes but who also want the option to physically drive in the country on weekends.

It must retain the same capabilities of today’s Jeeps, Range Rovers and others but also include new features consumers will want in 2030.

The competition is sponsored by interior suppliers Lear and IAC, and it is WardsAuto’s sixth collaboration with CCS, which has graduated many of the industry’s top designers. We’ve also had strong support from senior automaker designers who have either taught the class or volunteered to judge the final projects.

The idea is to envision a vehicle for the year 2030 that integrates its multiple roles in owners’ lives, from rolling office to off-roader.

To prepare the class, we kicked things off with a visit to the North American International Auto Show in January. Instructor Brian Stoeckel, a designer at General Motors, led the tour.

The NAIAS visit is important because we want the students to sit in a variety of vehicles and get a sense of the space and constraints they are working within.

Then we asked students to picture the lifestyle of a young professional man or woman who works in a major city but likes to spend weekends in the country camping, playing sports or enjoying nature with family and friends – and then fast-forward 15 years.

Ryan Goimarac created an interior for a CUV that would be at home in a South American megacity, where streets are narrow and still expected to be in rough shape in 2030. It comes with a small self-driving cart that follows its owner and carries groceries, tools or sports equipment.

Corneal Campbell’s family-friendly design includes a steering wheel that folds up and collapses like a telescope to create more interior room when it is in autonomous mode.

Relaxation is the theme of Makoto Takahashi’s futuristic Subaru XV. Its seats recline fully and allow occupants to watch movies or surf the Internet while the vehicle’s windows and moon roof turn into projector screens.