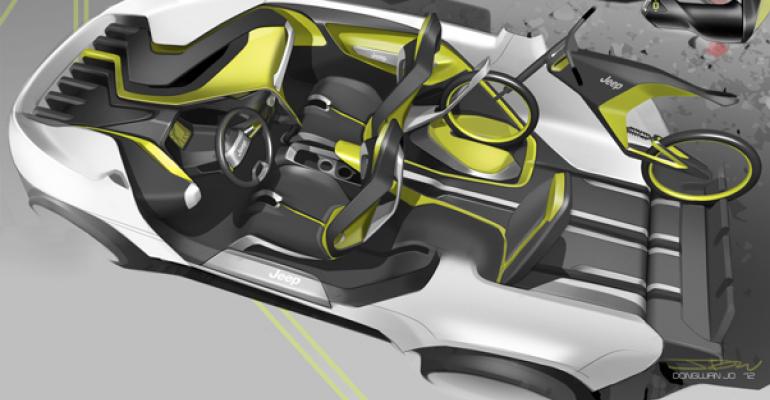 Vehicles already are a central part of many drivers’ lives, but transportation design students at the College for Creative Studies envision cars becoming even more of an extension of an owner’s lifestyle and personality a dozen years from now.

Despite a focus on practicality, their concepts nevertheless are fun and incredibly creative. Several feature seats that can be detached and turned into snow sleds or beach lounge chairs; others offer interchangeable modules for different types of tailgate parties.

For winter sports fans, several designs feature special compartments for snowboards and hockey sticks and even driers for wet ice skates. Others incorporate heated floor mats with drain holes for melting away snow from a day of snowboarding.

The competition is a special 15-week design project sponsored by WardsAuto and interior suppliers IAC and Lear. The class is taught by CCS instructor Robert Walker, whose day job is heading up Chrysler’s Interior Systems Design Studio.

The class worked from a detailed design brief created by WardsAuto editors. The brief challenged students to create a compact CUV interior for an active young professional. Design concepts were to be based on existing small CUV entries such as the Nissan Juke and Jeep Compass and evolved forward 13 years.

The core customer for the product is a 25-year-old recent college graduate who lives in an urban environment and enjoys an active lifestyle.

Four finalists from a CCS class of 16 talented students – Dexter Carrie, Sean Hahn, Dongwan Jo, and Taylor Langhals – were announced at a special ceremony April 25 during the recent SAE World Congress in Detroit.

The judges evaluated the student designs on realistic use of technologies and materials; innovative concepts for driver and vehicle interaction that also take into account driver distraction issues; safety features that reflect likely consumer demands and government regulations; and strength of overall design.

Carrie’s design is a meticulously crafted concept of a Nissan Juke with design cues from motorcycles and video games. It also features active interior trim pieces that display images, colors and information like a current-day smartphone.

Hahn’s interior is a hockey player’s dream. In addition to stick holders and a built-in skate-drying system, it also has an electronic facial monitoring system for detecting drowsiness, a common problem for amateur hockey players who often play in the wee hours.

Jo’s concept is a futuristic Jeep interior that integrates electric-powered bicycles that fold into the vehicle’s rear cargo area. Extra batteries for the bikes are stored and charged in their own compartments. They are part of the vehicle’s hybrid-electric powertrain when not powering the bikes.

Langhals’ downsized Jeep Wrangler is a minimalist design for the hardcore off-roader. It features an innovative frame structure and clever ideas for stowing tow straps and other off-roader necessities onboard. Cameras are placed strategically to aid the driver in climbing over rough terrain.

The grand prize recipient and winners of two special awards, the IAC EcoBlend Award for an outstanding green design and the Lear Design Innovation Award honoring a creatively forward-looking idea, will be announced May 17 at the WardsAuto Interiors Conference in Dearborn, MI.