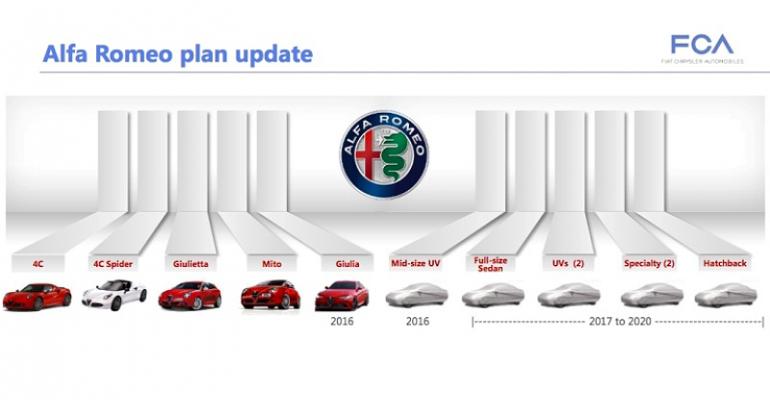 Stelvio CUV Next Up in Alfa’s Revival Effort

The Stelvio shares its platform with the Giulia and will offer diesel and gasoline engines ranging in output from 134 hp to 503 hp.

TURIN, Italy – Deliveries of Alfa Romeo’s long-awaited CUV, to be called the Stelvio, are expected to get under way in Europe in February, following the new model’s debut at next month’s Los Angeles auto show.

The new CUV is the second big volley in Alfa’s product-led revival that kicked off with the Giulia sedan, on the way to the U.S. this fall.

Alfa scooped itself on its planned L.A. show unveil back in September, when parent Fiat Chrysler Automobiles posted a YouTube video of the Cassino plant, where the new Alfa Giulia is being assembled, that also showed a passing shot of the Stelvio.

The video later was amended to cut out the Stelvio once enthusiast websites began posting the picture, although it is likely the sneak peek was no accident and was meant to publicly tease the new model prior to its release.

The Stelvio shares its platform with the Giulia and will offer diesel and gasoline engines ranging in output from 134 hp to 503 hp. An optional 8-speed automatic transmission will be available in all-wheel-drive models.

Separately, in a report to investors, FCA CEO Sergio Marchionne presents an updated plan for Alfa Romeo that outlines what the group has in mind for 2017-2020. The romantic and iconic Alfa Romeo Spider, with considerable appeal for enthusiasts but not for the bean counters, will be dropped in favor of two more utility vehicles.

One of the utilities reportedly will be a hybrid to compete in the same segment as the Audi Q7 and Maserati Levante.

Sources say the next sports cars from Alfa will be a high-performance derivative of the Giulia sedan and a convertible version of that car. Also in the 2017-2020 pipeline is a larger sport sedan (close to the Maserati Ghibli in specification) and a 5-door hatchback in the Giulia class.

Marchionne says the lineup needed for the revival of Alfa Romeo “will be completed by mid-2020.”