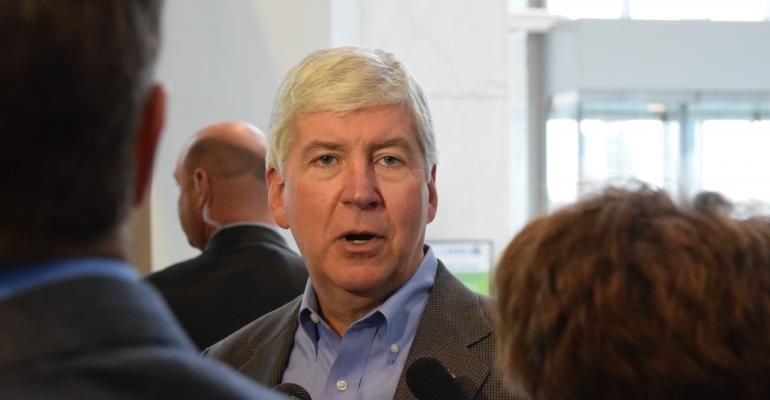 Snyder: Michigan Has Jump on Autonomy, But Willing to Share

Michigan&rsquo;s governor says his background in the computer industry makes him the perfect point man &ndash; and an enthusiastic salesman &ndash; for the state&rsquo;s effort to stake out ground in the new-mobility sector.

DETROIT – Mobility is one of the themes at this year’s North American International Auto Show and a subject that easily gets an enthusiastic Rick Snyder talking.

The Michigan governor has been leading the charge to transform his state into a hotbed for autonomous-vehicle development, putting state monies behind the Mcity autonomous-vehicle test ground in Ann Arbor, MI, and an even bigger research center now under construction in Ypsilanti, MI, on the site of the Willow Run B-24 bomber and war-munitions production facility during World War II.

Snyder also recently signed legislation governing autonomous-vehicle operation on public roads, making Michigan one of the first states to pass such a law.

A self-described nerd, Snyder says his background in computers makes him a perfect fit for fronting the state’s mobility movement. He sat down for a brief interview with WardsAuto at NAIAS to talk about Michigan’s drive for a leadership role in emerging transportation technology. Following is an edited transcript:

WardsAuto: You broke ground recently on the Willow Run American Center for Mobility test facility and you’ve signed a law governing operation of autonomous vehicles on public roads. What more has to be done at a state level to ensure Michigan is a cornerstone for new-mobility technology?

Snyder: Even before (Willow Run) we did a couple things. Mcity was a good start. That’s what really pushed us for building the American Center for Mobility. I didn’t officially take on the title, but I was chief marketer for Mcity. And as I went around talking to people, we packed the place. We just ran out of capacity at Mcity. So the concept was, how can we scale it up and do something complementary?

So the way I view it, Mcity will continue in its role, it will most likely become (focused on) more advanced research, where more engineering and development applications will be at ACM. But ACM is roughly 10 times the size.

And I’ve got to thank our team for being creative…for how we essentially un-dedicate public roads in some fashion to allow us to put in infrastructure that would be difficult for other people to replicate.

At one point that site had 45,000 people working there. And if you think about the overpasses, underpasses, the limited- access highway that all went through there, (most of that is not) required any more. So we’ll take half the highway, leave the other two lanes on the other side for the public to use – and that’s plenty – and take this other part and make it part of an extended loop throughout the facility at very little cost.

But the part we don’t talk about very often is all the on-road and simulation work already going on. We’ve got V2I (vehicle-to-infrastructure) and V2V (vehicle-to-vehicle) work going on throughout all of Ann Arbor. It involves 3,000 cars now, going to 9,000. And then we’re putting intelligence into our freeway development around the area. For example, we’re doing a project on US 23 north of Ann Arbor, and as we do that work they’re doing more sensor networks and different things there that will gradually have more value-add. And if you think of collecting that data in its own right, the data- mining and the artificial- intelligence aspects are going to add tremendous value over time.

Sorry, I get on a roll. I love this stuff. I’m passionate about it. The other thing is the non-physical piece, which is the regulatory environment, the insurance environment, the legal questions involved and this is where we want to leverage our universities to create forums and venues to say, How do you insure a vehicle?

WardsAuto: So this is going to have huge infrastructure-cost implications.

Snyder: I think it’s actually going to save on infrastructure. If you think about the relative concept of the cost of doing these sensor networks, as you do them in scale and volume they’re relatively inexpensive compared to laying a mile of concrete. And if you can save by not having to build a lane or not have do some things as quickly in terms of physical infrastructure, it will pay for itself. At some point you can utilize that road more efficiently. I don’t know if you can totally eliminate congestion, but if you can get all these vehicles talking to one another you can add dramatic value in terms of utilization of the infrastructure. So it will cost, but I view it as a net reduction from what you might have to spend in terms of building infrastructure.

WardsAuto: What do you think is needed from a federal standpoint? And have you had any conversations with President-elect Trump about that?

Snyder: Well, I think (the Trump Admin. is) just getting established. (But) we’ve done a lot of work with NHTSA, for example, over the last two or three years, (as well as) the Department of Transportation. Because they’re going through the process now of identifying sites that can be designated as federal test sites in some fashion, and we hope ACM can be one of those. We’ve applied for that status.

Snyder: Yeah. When they hear you broke ground, it makes it more real. The other part is, I don’t think there will be one site that will do everything in the world. I’m trying to position us as the hub of a network. How can we partner with other countries and their test facilities to share information and data? And how to work toward harmonized regulations across various jurisdictions?

Because if you talk to industry people, that’s one of their greatest concerns – the fact they could end up with (so) many different regulatory schemes. That will just impede the technology transition of this and the introduction times. Realistically there’s no reason there should be that many different requirements. I mean, it’s the same basic issues. So the question is, as a state can we play a convener role in the center of this ecosystem to bring people together, talk to national governments collectively and can get them to work together?

WardsAuto: Are you finding national governments receptive to the idea or collaboration or is it more competitive?

Snyder: Coopetition. We’re in a leadership position today if you look at MCity and ACM in particular. And I think it’s good to say we’re not trying to leave everyone behind, we’re looking to partner with people. I think we can maintain our leadership if we do that, because we’ll have good data and cause the introduction of technologies faster. The faster you introduce (the technology) the more people you have using it and the more value it has.

WardsAuto: So you’re a believer?

Snyder: Do I sound like it? Well, I came from the IT industry. I helped run Gateway computers back in the ʼ90s. One, you’ve got a huge IT element in all this. The other part that is helpful is the technology-adoption curve. I’ve lived through that a couple of times, and you’ve got to have the early adopters, fast followers, people in the middle and the laggards. You can’t wait to get everyone on board at once. You’ve got to work the technology-adoption curve.

WardsAuto: So do you think the U.S. has the lead in autonomy?

Snyder: I do, but it is not something we can take for granted.

WardsAuto: You recently made a business-recruitment trip to China, and here on the show floor is China Guangzhou Automobile, which is looking to set up an R&D operation in the U.S. Have you met with them about locating that in the state?

Snyder: Well the impression I get is they’re probably looking to the West Coast more. But over time, we’re the natural place by far…most of what we’re seeing in the supply chain is they’re setting up something in Michigan. You can go down the list, from Uber, Waymo – everyone’s looking to Michigan. When you’ve got 75% of the automotive R&D happening in your state…and then you add on this intelligence stuff (where) the government is helping with the infrastructure piece between legislation and facilities...I appreciate people may want to try other things, but sooner or later I hope they’re going to have some true physical presence. Beyond that we’ve got the best talent for engineering.