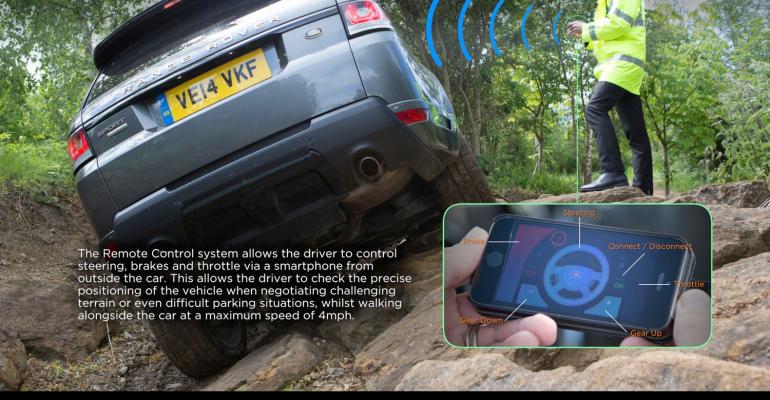 Future possibilities for the JLR technology could include greater autonomous functionality where the driver gives a command from the handset to traverse an obstacle or exit a parking space, and the car does the rest.

Jaguar Land Rover is working on technology to allow a driver to control the vehicle from outside the car using a smartphone.

The smartphone app includes control of steering, accelerator and brakes.

The U.K.-based research team says the driver could use the smartphone to back the car out of a parking space if another vehicle is parked too close to open the door.

This would allow the driver to walk alongside the car at up to 4 mph (6 km/h) to safely maneuver the car out of challenging situations, or even negotiate difficult off-road terrain.

By walking alongside the car, the driver could continually check ramp, approach and departure angles and allow precise positioning of the vehicle when rock crawling. It also could assist the vehicle in fording a stream or crossing terrain made slippery by mud or snow.

The remote-control function will operate only if the user is within 33 ft. (10 m) of the car and if the smartkey can be detected. The system will stop the vehicle if the driver moves out of range or gets too close.

Future possibilities for this technology could include more-autonomous functionality where the driver gives a simple command from the handset to traverse an obstacle or exit a parking space, and the car does the rest.

JLR says its “multi-point turn” Range Rover is capable of autonomously maneuvering through 180 degrees to turn the car in the road and point it in the opposite direction.

The system uses sensors to assess available space and avoid pedestrians, vehicles and other objects. The system takes over gear selection, steering, braking and acceleration to make as many forward and backward movements as necessary to achieve the maneuver.

“A remote-control car, or a vehicle that can autonomously turn in the road, demonstrates how we could use these new technologies to reduce the tedious parts of driving and improve road safety,”

Epple says research into technologies such as these not only will help deliver an autonomous car, but also will help make real driving safer and more enjoyable.

“The same sensors and systems that will help an autonomous car make the right decisions will assist the driver and enhance the experience to help prevent accidents,” he says. “Autonomous-car technologies will not take away the fun of driving.”

JLR aims to offer a choice of an engaged or autonomous drive; the car will be able to drive itself if the driver chooses, or offer systems that can be adjusted for a more engaging and involved drive.

“Because our customers drive in all terrains and in all weathers, any future autonomous Jaguar or Land Rover must be as capable on rough tracks and unpaved roads as it would be on city streets,” Epple says.

“We are working on an array of new sensors that would enable a car to operate in any environment, without any outside intervention or input from lane markings or roadside infrastructure such as traffic lights.”

JLR research engineers have a nicknamed a vehicle with this level of capability the Solo Car.

The automaker is conducting an advanced research program to enhance the car’s sensing capability by developing a range of sophisticated sensors to make autonomous cars viable in a range of driving environments and weather conditions.

Creating a car capable of functioning autonomously in all situations requires a fusion of sensors with different attributes including radar, LIDAR, cameras, ultrasonics and structured light technology.

JLR is part of a U.K. Autodrive consortium that will undertake real-world testing of new advanced driver-assistance systems technologies in Coventry and Milton Keynes. Its role in the project includes the evaluation of semiautonomous driving features in a Range Rover research vehicle and the development of human-machine interface systems in autonomous transport pods.