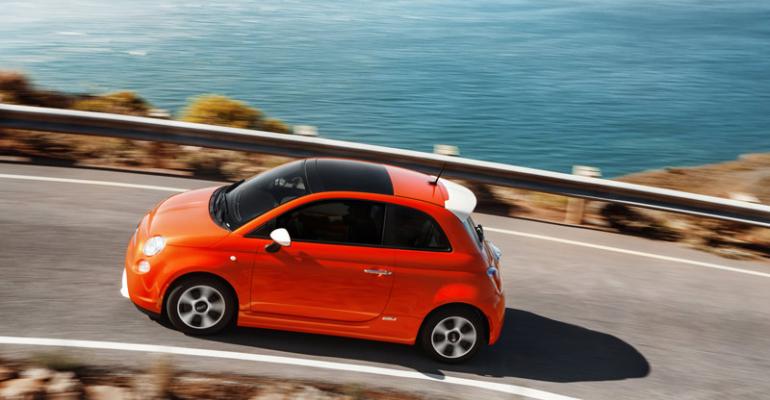 A top engineer reveals that long before Fiat expressed interest in Chrysler, the U.S. auto maker was developing an electric powertrain for an unspecified vehicle.

SANTA MONICA, CA – Some would call it compliance, but others might say it was fate that Fiat’s 500 subcompact ended up being the first electric vehicle marketed by Chrysler.

Long before the Italian auto maker took an interest in the American manufacturer, Chrysler engineers were developing an electric powertrain and considering a partnership with another auto maker to bring it to market.

“We were already considering the 500,” Brett Giem, chief engineer-Fiat 500e, tells WardsAuto on the sidelines of a media drive here. “We were looking at what an electric car might be, and then the merger happened, so it was serendipity.”

The 500 was a top choice because it is a lightweight vehicle that can accommodate a heavy battery. “A lot of it (takes into account) the efficiency of the car,” Giem says. “The car is very small, and the car has a very small interior volume.”

Engineers began with the 500 model sold in Latin America, which has specifications different than those of the European model but has an ideal ground clearance for the vehicle in mind. “We were able to adapt it very easily,” he says.

A battery in an electrified vehicle can run 6-7 ins. (15-18 cm) deep, making for difficult placement in the body. Engineers packaged the 500e’s battery under the floor between the front and rear seats with the additional goal of making seating feel like that of a “regular” car, Giem says.

The electric powertrain underwent two years of development before being introduced this year as a California-only model. Chrysler-Fiat is considering a plan to roll out the vehicle across the U.S. in stages over the coming years.

“The whole intent was to devise transportation for 2020,” Giem says.

The electrification-engineering team has the capability to modify another model in the Chrysler lineup, but there has been no official announcement on whether the auto maker will move beyond the 500e.

“It’s just a matter of us coming up with an appropriate strategy for what our customers are wanting versus the regulatory requirements, and what our best solution set is for that,” he says.

With the 500e, however, other characteristics from that vehicle may find its way into non-electrified 500 models.  “We might have solved a lot of aerodynamic problems with the base car,” Giem says, noting that a rear spoiler, angled side mirrors and lighter materials were added to the electric model.

The 500e also employs materials to reduce noise, vibration and harshness, including new door sealing and a new windshield.

A convertible 500e could be produced, Giem says, but there would be an additional challenge in preserving the car’s aerodynamics and other energy-saving techniques.

For now, Chrysler considers its electrification engineers a valuable asset as Fiat gains a foothold in the U.S. and Chrysler rebounds from near-dissolution.

“It’s exciting to be on the engineering side,” Giem says. “The Chrysler electrification team is considered the Fiat worldwide electrification hub. Going forward, we will be a part of that.”