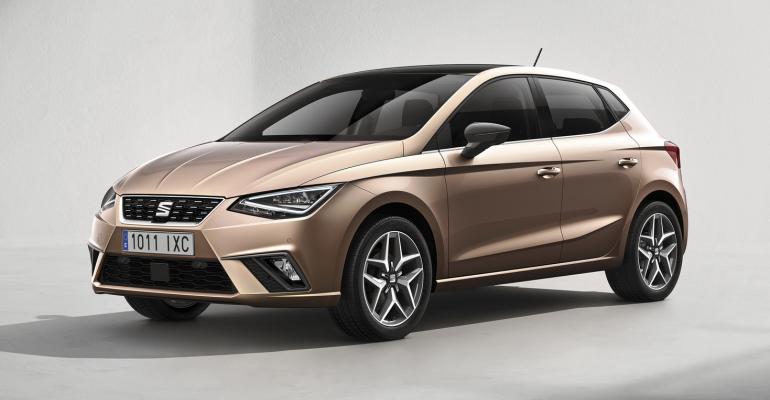 <p><strong>The fifth-gen Ibiza is one of the first vehicles built upon VW Group&rsquo;s MQB A0 platform, a shorter variant of the new, weight-saving MQB platform. Future VW Polos &nbsp;and a small CUV based on it also will use the MQB A0.</strong></p> <p>&nbsp;</p>

MADRID ─ SEAT unveils the fifth generation of its Ibiza car range, one of the Spanish automaker’s most important products with nearly 5.4 million units sold between 1984 and 2014.

The new Ibiza, which makes its public debut at next month’s Geneva auto show, will be the base for the future Arona compact CUV that will be smaller than the Ateca urban CUV launched last year. Volkswagen Group-owned SEAT says the Ibiza, Ateca and Leon ranges will be its three pillars in the near term.

The fifth-gen Ibiza is one of the first vehicles built upon VW Group’s MQB A0 platform, a shorter variant of the new, weight-saving MQB platform. Future VW Polos and a small CUV also will use the MQB A0.

All of the new-gen Ibiza’s engines will meet Euro 6 emissions standards. They include 3-cyl. 1.0L TSI turbocharged, intercooled, direct-injected versions making 95 or 115 hp. A 4-cyl. 1.5L TSI creating 150 hp will be available in late 2017.

The engines making 95 hp or less will be mated to a 5-speed manual transmission, while the more powerful engines get a 6-speed MT or optional dual-clutch 7-speed direct-shift gearbox.

The new Ibiza will offer a 7-speaker Beatsaudio sound system with a digital signal processor and 8-channel, 300-watt amplifier.

SEAT has not yet announced pricing for the new Ibiza.