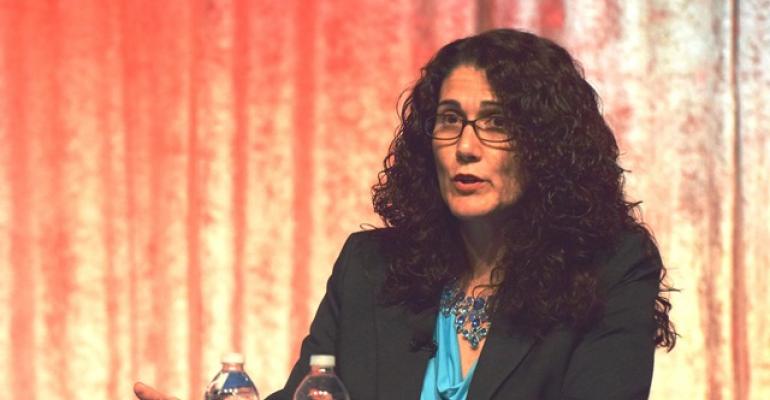 GM researcher Gary Smyth says technology that will be developed in the next 10 years will eclipse what the automotive industry has achieved over the past 30 years.&nbsp;

DETROIT – Autonomous vehicles could mean different things to different people. Some may value the technology to ease the stress of their commute, while others may embrace the fuelsavings provided by such systems.

For automakers safety is the primary concern, panelists say during a session at the 2015 SAE World Congress here titled “The Glide Path Toward Autonomous Vehicles.”Derek Caveney, manager-Toyota Motor Engineering & Manufacturing North America, says systems in use in Japan illustrate how the technology exists today to mitigate collisions.

For the past five years, the Japanese government has integrated dedicated short-range communications systems into the highways. The units transmit information to vehicles to warn drivers of situations such as upcoming traffic jams and areas where other vehicles are merging.

Over 2,000 such units now are in operation, and Caveney says they represent a step toward autonomous driving.

“Government and industry institutions are encouraging OEMs to deploy technology for safety that also can be used for autonomous driving,” he says. “There are many (autonomous) enablers available now on production vehicles.”

While the U.S. is not as far along as Japan in deploying DSRC technology, Caveney says research is progressing quickly and NHTSA is considering mandating vehicle-to-vehicle systems, considered another step toward autonomous vehicles.

“Toyota is working with NHTSA to define automation levels and test methods,” he says. “And (autonomous) driving is shifting toward production.”

Although technological development is on track, Caveney says a number of things could bring it to a halt, including restrictive government regulations, insufficient supervision of vehicles by drivers while in autonomous mode, poor performance of the systems and consumers being confused by the technology.

But even if some of those factors come into play, Caveney says autonomous-vehicle technology likely will be deployed in the near future.

“Smaller OEMs like Tesla are pushing larger OEMs,” he says. “And (tech) companies like Google and Apple also are investing in autonomous driving.”

Gary Smyth, director-Powertrain Systems Research Lab at General Motors, says technology that will be developed in the next 10 years will eclipse what the automotive industry has achieved over the past 30 years.

Like Toyota, GM’s main goal in developing autonomous vehicles is to increase safety, he says.

“We’re marching toward autonomous vehicles that don’t crash,” Smyth says. “That really is what it is about.”

Many of the technologies found in GM cars and other vehicles today will be used for autonomous driving, including forward-collision alert, lane-departure warning, cross-traffic alert and adaptive cruise control.

“We’re marching up the curve to more complex intervention and giving control (to the vehicle),” Smyth says.

GM in 2017 plans to introduce a feature on the new flagship CT6 sedan called “Super Cruise,” which will allow for autonomous driving on the highway.

Such technology will make its way from luxury vehicles to mainstream cars, Smyth says. “We have to protect everyone.”

Even when autonomous vehicles are ready for production, getting consumers to accept them will be a challenge, says Myra Blanco, research scientist at the Virginia Tech Transportation Institute Center.

“Safety for safety’s sake is not going to cut it because research has proven over and over that everyone thinks they’re better than the person next to them in terms of driving,” she says. “So how do we sugarcoat safety with something else to create that type of user adoption?”

Selling the convenience factor of the technology is good way to get consumers to embrace autonomous vehicles, but that won’t necessarily work with all drivers.

Seniors, she says, don’t easily embrace new technology, but they could accept autonomous vehicles if it was explained to them how it would enhance their lives.

“They are still very active, but their reaction times have declined, so they can use that additional boost,” Blanco says. “It’s been proven over and over again when seniors stop driving, that’s when they start to decline.”

To get teen drivers to embrace the technology automakers should sell the coolness factor, she says, noting the top cause of teen deaths is auto accidents, which autonomous cars would help avoid.

“How do we make those new designs seem cool to them, because safety is probably not going to be the key word for them?”