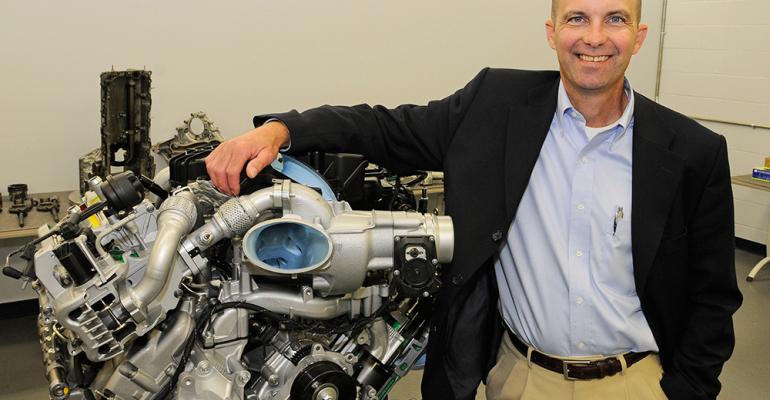 The U.S. mandated European-style standards for ultra-low sulfur content in diesel fuel in 2007, resulting in improved diesel engines and emissions.

U.S. fuel has a research octane number (RON) of about 91, while Europe has a standard of 95 RON or higher. That’s a huge difference to engine experts. If automakers could stop designing engines to avoid low-octane engine knock, engine efficiency could be improved by as much as 5%, Bob Fascetti, vice president-Powertrain Engineering at Ford tells SAE attendees.

“We have to design for regular fuel (91 RON in the U.S.).  If we could get 95 RON fuel at the pump like Europe, if we could get higher compression ratios, we could get big benefits,” Fascetti says.

The idea hardly is unprecedented. The U.S. mandated European-style standards for ultra-low sulfur content in diesel fuel in 2007, resulting in dramatically improved diesel engines and emissions.

“Our (octane number) is too low,” Bob Lee, vice president and head of Engine and Electrified Propulsion Engineering at Chrysler, tells reporters on the sidelines after his presentation. Lee’s estimate for fuel-economy gains is slightly lower, but he says, “I’m giving up 2% or 3% (in fuel efficiency) just to go from 95 octane to 91.”

Higher compression ratios are beneficial in many ways, Lee says, such as improving the efficiency of Atkinson-cycle combustion strategies.

The three powertrain chiefs have spoken about moving to higher octane at technical conferences and in Washington, where the Department of Energy is well aware of the benefits, but have not said much publicly until now.

“I can’t say we’ve actually lobbied together, but it’s a common-sense thing. If we had a single-octane fuel that was higher, then we can take advantage of that for the customer, we can implement higher compression ratios and we won’t be knock-limited on the fuel,” Fascetti says. “It’s win-win for the innovators as well as for the customers.”