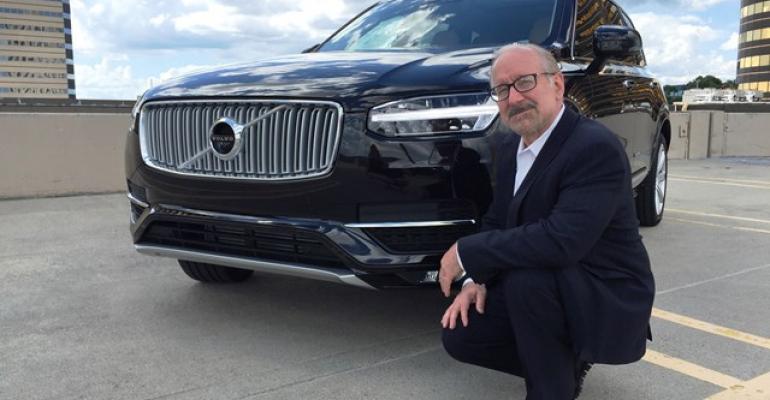 Volvo is back in a big way with a groundbreaking vehicle, and everyone in the segment should take note.&nbsp;

TRAVERSE CITY, MI – Electric vehicles and hybrids have gotten most of the headlines as the auto industry shifts to more fuel-efficient vehicles. But downsized, forced-induction engines and more advanced transmissions deserve most of the credit so far for enabling the industry to meet increasingly stringent corporate average fuel-economy standards.

The potent 2.0L 4-cyl. in the ’16 Volvo XC90 is a great example of how far the industry has come since the Obama Admin. announced aggressive mileage targets through 2025.

But the engine passed the test with flying colors cruising from suburban Detroit to the CAR Management Briefing Seminars, as we arrived here ahead of a damaging storm Sunday.

Despite the engine’s impressive specs, we expected to hear some harsh notes from the engine bay and some transmission fussiness up the hills, but it didn’t happen. The engine is almost silent when cruising and doesn’t sound much different than a typical 300-hp V-6 under hard throttle.

There was no hesitation or gear searching on the hills, thanks to a dual-induction strategy. The supercharger provides lots of grunt at low rpm, and then the turbo takes over and delivers boost at higher engine speeds. They work together beautifully to provide steady thrust across the power band.

Several other drive modes are available to make the engine more versatile. A dynamic mode enables faster throttle response by holding gears longer and letting the supercharger and turbo spool up more quickly while an Eco mode dials back all inputs to conserve fuel.

The dynamic mode makes the driving experience feel sharper and more precise all around. Eco mode numbs all the inputs and dials back air-conditioner output, which made things a bit uncomfortable in the cabin with outside temperatures nearing 90º F (32º C).

This powertrain in the XC90 is known as the T6, and a colleague says this is misleading because it suggests there is a 6-cyl. engine under the hood. However, after spending a few days driving the T6, we doubt anyone will care. Cylinders, smilinders, the engine delivers.

We wonder how well this engine would do hauling a few jet skis or a midsize boat. Customers planning to do a lot of towing might want a bigger-displacement naturally aspirated gasoline V-6 or a turbodiesel instead.

The efficient, power-dense engine isn’t the only thing that stands out while driving the XC90. All premium CUVs priced above $50,000 have interiors loaded with high-grade materials and lots of electronic features, but Volvo designers took a true clean-sheet design approach to turn the XC90 into a technologically advanced Scandinavian sanctuary.

Our loaded-up $67,000 model features gorgeous blonde wood trim and lots of other touches that set it apart from competitors. In addition to artsy design cues, the human-machine interface features an iPad-sized touch screen and autonomous driving features that are intuitive and easy to set up.

We set a long following distance for the smart cruise control and enabled the lane- departure assist to let us drive for miles without touching the steering wheel. It accelerates, brakes and follows the road automatically.

However, after a minute or two the vehicle tells you to put your hands back on the wheel. At lower speeds in traffic, it will obediently follow the car in front without complaint.

It’s not the only car with these types of features, but add them to Volvo’s distinct design and excellent overall user experience and you’ve got a very strong new player.

The new XC90 promises to be disruptive in the premium CUV segment, but it does have a few issues that need to be fixed right away.

First, the dynamic mode lowers the body almost an inch (2.5 cm) to improve handling. However, it seems to reduce suspension travel so much it can transmit really nasty metal-on-metal vibrations through the chassis when hitting potholes.

We’re not sure if this is just a flaw with our test car or a problem for the engineers. The big wheels and low-profile tires look great but probably are co-conspirators.

Second, the wonderful iPad-like touchscreen takes what seems like a minute or more to load navigation and other functions. Whatever the actual time it takes, it’s too long.

Another quibble is the lane-departure/autonomous steering features can be very intrusive at times, almost feeling like they are taking control of the car.

But otherwise, Volvo is back in a big way with a groundbreaking vehicle and everyone in the segment should take notice.