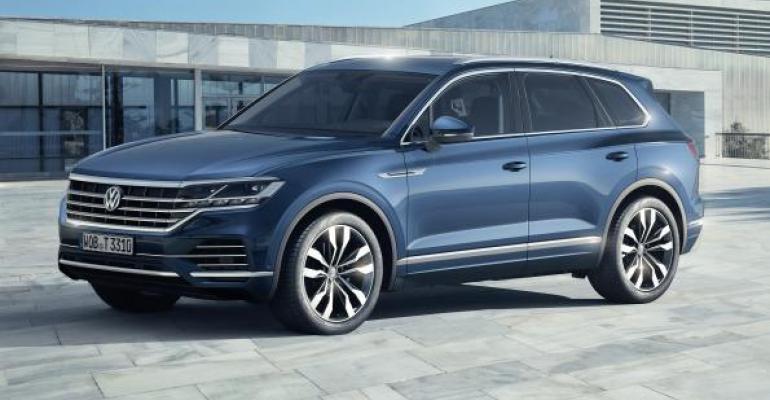 Volkswagen&rsquo;s ongoing realignment of North American operations, with a greater emphasis on volume segments with new models such as the 7-seat Atlas, means the Touareg no longer will be sold in the U.S.

BEIJING – Volkswagen bills its new Touareg as “the biggest leap forward in the history of the SUV” as it strives to position it farther up-market from its 7-year-old predecessor in a segment traditionally dominated by the likes of the BMW X5, Mercedes-Benz GLE and Volvo XC90.

The third-generation model, unveiled at a media presentation here, has been comprehensively redesigned and re-engineered for 2018. However, Volkswagen’s ongoing realignment of its North American operations, with a greater emphasis on volume segments with new models such as the 7-seat Atlas, means the 5-seat Touareg no longer will be sold in the U.S.

Together with technological features that VW says serve to make the new Touareg its most advanced series-production model yet, it also is claimed to offer a more on-road-focused character in line with studies that reveal customers rarely head off-road.

This is reflected in its exterior styling, advanced new chassis featuring 4-wheel steering and a first-ever anti-roll system, as well a new interior that debuts the German automaker’s new Innovision Cockpit control system featuring a curved 15-in. (38-cm) touchscreen display.

“It sets a benchmark at the top of the automotive world,” VW Chairman Herbert Diess says at the launch of the new Touareg. “It shows what Volkswagen can do in terms of design, technology and innovation.”

The more up-market positioning for the new model, which is planned to go on sale later this year in China and other markets, including Europe, comes as the high-riding 5-seat SUV succeeds the discontinued Phaeton at the very top of the VW lineup with larger dimensions, more room, new connectivity solutions and added luxury features.

Significantly, the ʼ18-model-year Touareg is the first to be developed with a clear focus on China, which in recent years has become its largest market in terms of sales volume on the back of rapid growth of SUV models of all sizes.

According to Diess, the SUV segment accounted for just 8% of the Chinese market in 2007. Ten years later, it accounted for 45% of all car sales there. “Nowhere in the world have we seen such explosive growth in SUV demand” as in China, he tells WardsAuto.

A sister model to the Audi Q7, Bentley Bentagya, Lamborghini Urus and Porsche Cayenne – alongside which the new Touareg is being assembled at VW’s SUV plant in Bratislava, Slovakia – it is among 19 SUV models the automaker plans for sale by the end of 2020.

VW believes its latest model will retain Touareg faithful and increase conquest sales from other premium-brand automakers including BMW, Jaguar and Mercedes-Benz. Emphasis has been made in leveraging the high-end functions and technology already seen on the Q7, Bentayga, Urus and Cayenne as Volkswagen attempts to give it a more exclusive slant.

The new VW is based on a heavily revised MLB platform as used by its Audi, Bentley, Lamborghini and Porsche siblings. As with the earlier MLB structure that underpinned its predecessor, it uses a steel monocoque design. Greater use of hot-formed high-strength steel is claimed to have improved rigidity while containing weight despite the overall increase in size.

The new Touareg’s styling is inspired by the T-Prime Concept GTE first revealed at the 2016 Beijing auto show. A bolder exterior design, dominated by a heavily structured grille similar in style to that used by the Aerton, aims to provide VW’s flagship SUV with greater presence than before. It also features tauter surfacing treatment, more heavily defined feature lines and larger wheelhouses – the latter fitted with 18-in. wheels as standard for the first time.

VW design boss Klaus Bischoff describes the new Touareg as an alternative to the establishment. “The design makes it unmistakably clear that it is the dominant flagship of the brand – a large and exclusive SUV from Volkswagen,” he says.

As with the exterior, the new Touareg receives a heavily redesigned interior with higher-grade materials than those found in its 7-year-old predecessor. In addition to the 15-in. centrally mounted touchscreen infotainment display, an optional 12-in. (30-cm) digital instrument display and new head-up display form part of a comprehensive range of new functions included in Volkswagen’s so-called Innovision Cockpit.

The Touareg offers the most comprehensive range of driver-assistance systems ever offered on a VW model. Highlights include a new night-vision system equipped with a thermal-imaging camera as well as an autonomous driving system allowing semi-automated steering and lane-keeping functions for up to 30 seconds, together with automatic acceleration and braking capabilities up to 37 mph (60 km/h).

The automaker plans to provide the new Touareg with a plug-in hybrid system. It combines a turbocharged 3.0L V-6 gasoline engine with an electric motor, though final details to the electrified powertrain are yet to be made official.

All engines come mated to a standard 8-speed automatic gearbox. It operates in combination with a center differential that provides permanent all-wheel drive in a system dubbed 4Motion Active Control. It is programmed to send up to 70% of drive to the front wheels, with 80% able to be sent to the rear wheels depending on prevailing traction.