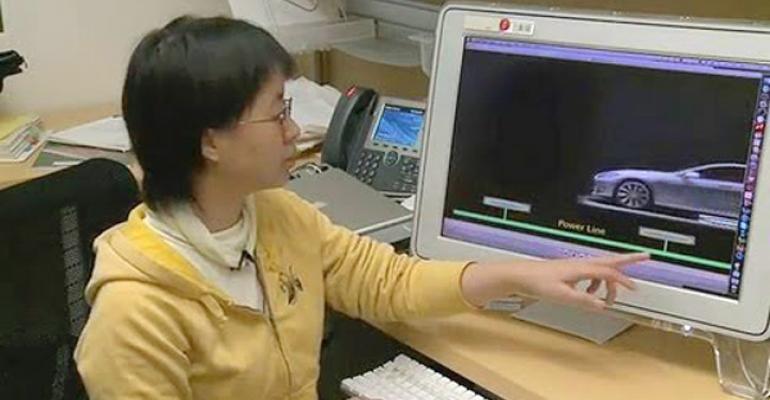 The new technology has the potential to dramatically increase the driving range of EVs and eventually transform highway travel, the researchers say.

Shanhui Fan, an associate professor of electrical engineering, says the goal is to allow people to drive onto any highway and charge their vehicle.

“Large-scale deployment would involve revamping the entire highway system and could even have applications beyond transportation,” Fan says in a statement.

The researchers say a charge-as-you-drive system would address a major drawback of EVs: their limited range.

“What makes this concept exciting is that you could potentially drive for an unlimited amount of time without having to recharge," says Richard Sassoon, managing director of the Stanford Global Climate and Energy Project, which funded the research.

“You could actually have more energy stored in your battery at the end of your trip than you started with.”

The wireless power transfer is based on a technology called magnetic resonance coupling.

Two copper coils are tuned to resonate at the same natural frequency and placed a few feet apart. One is connected to an electric current, which generates a magnetic field that causes the second coil to resonate. This magnetic resonance results in the transfer of electric energy through the air from the first coil to the receiving coil.

“Wireless power transfer will only occur if the two resonators are in tune,” Fan says. “Objects tuned at different frequencies will not be affected.”

The Stanford researchers say that in 2007 researchers at the Massachusetts Institute of Technology used magnetic resonance to power a 60-watt light bulb. The experiment showed electricity could be transferred between two stationary coils about 6 ft. (1.8 m) apart, even with humans or other obstacles placed in between.

“In the MIT experiment, the magnetic field appeared to have no impact on people who stood between the coils,” Fan says. “That's very important in terms of safety.”

The MIT researchers are developing a stationary charging system capable of wirelessly transferring about 3 kW of electric power to a parked vehicle.

Fan and his colleagues decided to modify the MIT system to transfer 10 kW of electric power over 78 in. (198 cm), enough to charge a car moving at highway speeds.

Their system would work through a series of coils connected to an electric current embedded in the highway. Receiving coils attached to the bottom of the car would resonate as the vehicle speeds along, creating magnetic fields that continuously transfer electricity to charge the battery.

To determine the most efficient way to transmit 10 kW of power to a real car, the Stanford team created computer models of systems with metal plates added to the basic coil design. Fan says the objective was to figure out the optimum transfer scheme if large metal objects are present.

Using mathematical simulations, postdoctoral scholars Xiaofang Yu and Sunil Sandhu found the answer: A coil bent at a 90-degree angle and attached to a metal plate can transfer 10 kW of electrical energy to an identical coil 78 in. (198 cm) away. Fan says this is fast enough to maintain a constant speed.

“To actually charge the car battery would require arrays of coils embedded in the road,” he says. “This wireless-transfer scheme has an efficiency of 97%.”

Fan and his colleagues have filed a patent application for their wireless system. The next step is to test it in the laboratory and eventually in real driving conditions.

Sven Beiker, executive director-Center for Automotive Research at Stanford, says the research team still needs to make sure the system won't affect drivers, passengers or the dozens of microcomputers that control steering, navigation, air conditioning and other vehicle operations.

“We need to determine very early on that no harm is done to people, animals, the electronics of the car or to credit cards in your wallet,” Beiker says.

Although a power-transfer efficiency of 97% is extremely high, Beiker and his colleagues also want to be sure the remaining 3% is lost as heat and not as potentially harmful radiation.

“We have the opportunity to rethink how electric power is delivered to our cars, homes and work,” Fan says. “We're used to thinking about power delivery in terms of wires and plugging things into the wall. Imagine that instead of wires and plugs, you could transfer power through a vacuum. Our work is a step in that direction.”