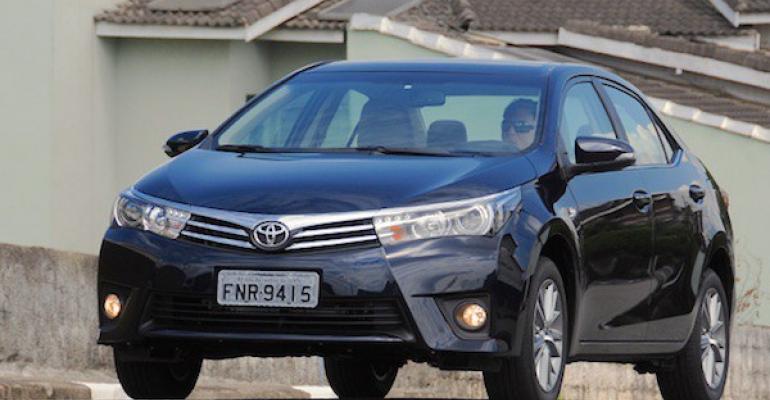 Report Says Automakers Finding It Easier to Be Green

The report aims to counter the notion stricter rules increase costs and hurt business, especially in emerging markets. Instead, it argues, automakers can boost earnings by selling clean cars, leveraging investment in R&amp;D through patent&nbsp;innovation.

LONDON – Industry experts seem to agree: Past concerns that tough environmental laws could force auto manufacturing from a “green” jurisdiction to a country or region with less stringent controls no longer seem to apply.

In doing so, industry specialists are backing the conclusions of a new report from the world’s largest think tank, the Paris-based Organization for Economic Co-operation & Development, which said following tighter environmental rules can be good business.

Instead, it argues, automakers can boost earnings through selling clean cars, leveraging investment in R&D through patenting innovation.

Antoine Dechezlepretre, associate professorial research fellow at the LSE’s Grantham Institute on Climate Change and the Environment, notes there are 40% more inventions in clean-car technology than in more traditional car technologies.

“Clean cars is one of the biggest green-industry growth areas and ranks alongside the nano-technology, 3-D and robot industries. We need more R&D incentives as well as emissions-pricing policies,” he says.

“There will be winners and losers and this will depend on the productivity of the company,”

OECD Chief Economist Catherine Mann says at the report launch. “A good company will react to a new green policy with innovation; a bad one may react with mass layoffs. Being the first to enter what will be a major new global market will give a company a clear edge.”

Mann says the effect of tighter environmental policies could be to weed out high-polluting, low-productivity companies. She favors a system of cost-based pollution taxes backed by a significant increase in resources for R&D to help manufacturers respond.

“There is a huge opportunity for industries to innovate in green technology. This is a huge emerging market and being the first player will give you a significant advantage,” she says.

Mann adds industries as globalized as the auto sector could profit by transferring green technologies to lower-wage factories in South Asia and elsewhere.

The OECD also highlights a study of the effect of the European Union’s Emissions Trading System, which notes there is little evidence it had caused so-called carbon leakage – firms reacting to the system by shifting production, and hence emissions, outside Europe. Instead, it helped generate a 30% increase in green patent registrations.

Speaking later to WardsAuto, auto-industry expert Peter Cooke, emeritus professor at Britain’s University of Buckingham, agrees with the general findings of the report: “Regulation is going to apply everywhere eventually. It is becoming more and more difficult to avoid it anyway – even if a country can offer a regulatory haven, it is likely to be a very small or unstable country.”

Cooke says all new-car plants are being built to the highest regulatory standards. “New plants tend to be on greenfield sites and shaped long and thin so that they can assemble lots of components that come in from elsewhere, rather than making the components, then assembling them,” he says, adding that “India and other emerging markets are establishing regulatory frameworks so that manufacturers have to play the game right from the start.

“It needn’t cost very much, provided that manufacturers get enough warning so that regulations can be met. One of the biggest issues is to get regulators in different countries to talk to each other.”

Manufacturers could help by combining efforts to educate policymakers on what they can deliver in terms of making environmental improvements.

And Maelle Soares Pinto, director-global alternative fuels, biofuels assessment and outlook at Houston-based industry consultants Stratas Advisors, says advances in clean cars “have been driven by regulations, either meant to support energy efficiency, lower environmental impact of vehicles on the road…or even domestic economy, as in the case of ethanol and then flex-fuel vehicles (FFVs).”

Stratas colleague and fellow director of global fuel specifications Huiming Li notes the auto industry does comply with green regulatory frameworks to produce cars, reaping benefits as a result: “Take, for example, in Brazil, where FFVs have been created and produced by the automakers for the local market to comply with the ethanol mandate” forcing cars to run on fuels more than 25% made of ethanol, she says. “FFVs are not common in other countries, although more countries are slowly starting to introduce them – for example, Thailand.”

She notes smart exporters in countries such as in Japan make FFVs for the Brazilian market, even though they are not sold domestically, “since there is no ethanol mandate that requires their use” in Japan.

That said, Li notes most, if not all, countries require the support of a regulatory framework to help promote the use of alternative fuels and vehicles. She cites electric vehicles, which “have been supported by several governments with the help of fiscal incentives – for example, in China. Of course, several hurdles still remain – but without governmental support, the industry would find it challenging to move forward.”

One industry innovator is U.K.-based global technical consultancy Ricardo. The company promotes the use of carbon-emissions calculations covering a product’s manufacture, use and disposal and urges manufacturers to adopt the same approach.

Ricardo notes automakers and other companies will have to work toward the emissions-reduction targets agreed at the Paris climate-change talks in December while complying with other environmental regulations. In the past 12 months Ricardo has started to advise more companies on vehicle systems, hybrid and electric vehicles and vehicle lightweighting.