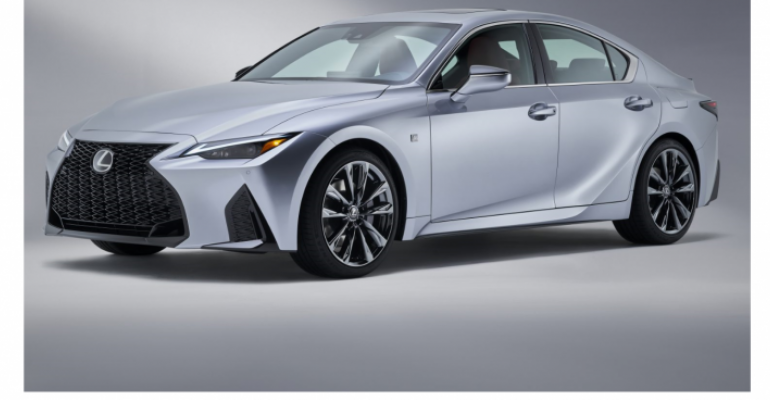 Lexus
Despite riding on same wheelbase as ’20 model, the ’21 IS now is 1.2 ins. (30 mm) wider, and rear wheels get muscular flared fenders to accommodate new wheels.
Vehicles

Going on sale this fall in North America, the ’21 IS is the first new Lexus model developed at the Toyota Technical Center in Shimoyama, Japan, that opened last year.

It took a new test track for Lexus to engineer the 2021 IS sport sedan the way it wanted. While the refreshed IS retains some of the characteristics that have made it a competitor in the compact luxury sport sedan segment, it’s been wrapped in an edgier new look.

The ’21 IS is the first new Lexus model developed at the Toyota Technical Center in Shimoyama, Japan, that opened last year.

Its centerpiece is a 3.3-mile (5.3-km) test course inspired by the famous Nürburgring in Germany, with asphalt that rolls up and down the landscape’s slight hills and offers a variety of curve styles and road surfaces.

Lexus says developing the IS on this new track “signals a change in Lexus’ product development course.”

That means the automaker is upping its standards for performance and handling for all new Lexus models with something called Lexus Driving Signature. Part of the new direction means implementing the “continual, running enhancement” that the company has used for its flagship vehicles (LC, LS and LX) across the entire Lexus lineup.

Toyota’s luxury brand says its new “uniquely Lexus tarmac testbed…will affect the trajectory of every Lexus product that comes next.”

So, the refreshed IS has a lot to live up to, and from the looks of things, it’s doing so. From all angles, this is a handsome sedan. A new, larger grille sits snugly against thin, sharp headlamps.

The “blade-style” taillamp traverses the entire width of the rear, reminiscent of the thin red line found on the current Toyota Prius Prime.

Despite riding on the same wheelbase as the ’20 model, the ’21 IS now is 1.2 ins. (30 mm) wider, and the rear wheels get muscular flared fenders to accommodate the new wheels. Gone are the standard 17-in. wheels, replaced by 18-inchers, with two different 19-in. options available on the F-SPORT versions for the first time, one of them only on models equipped with the Dynamic Handling Package. 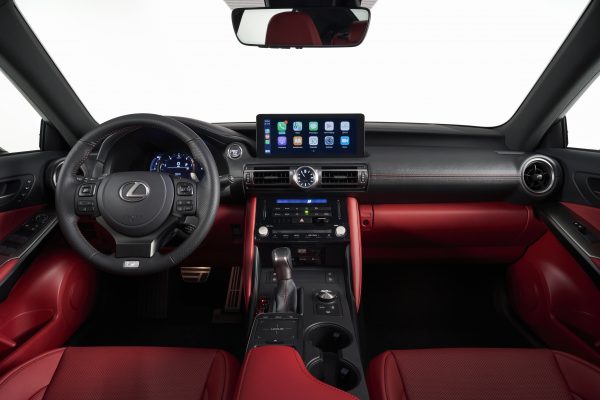 Despite the investment in track enhancements that Lexus used to develop the refreshed IS, the automaker does leave some things the way they were.

If those numbers sound familiar, you’re right, as they’re the same specs found in the ’20 IS. Also like its predecessor, the ’21 IS will come in RWD or AWD versions. No battery-electric or plug-in options will be available.

There are some more new bits in Lexus’ “Intelligent Sport” sedan, including something that makes the car, well, a bit more intelligent.

Apple CarPlay and Android Auto finally are available and there’s a new, larger 10.3-in. (26-cm) infotainment screen (an 8-in. [20-cm] screen is standard). Lexus also has enhanced the driver-assistance and safety features to compete with rivals. 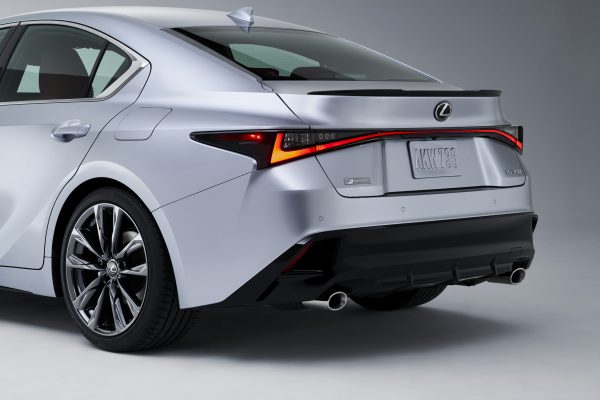 That’s fewer than competitors such as the Audi A4, Mercedes-Benz C-Class and BMW 3-Series sold last year, but ahead of the Genesis G70.

The ’21 IS goes on sale in North America this fall. If you don’t want to wait that long, Lexus has released an augmented-reality app that will let you spec out the car and then turn your dream into a digital remote control vehicle that you can pretend is driving around your living room.

The Lexus AR Play app is available for iOS and Android phones.