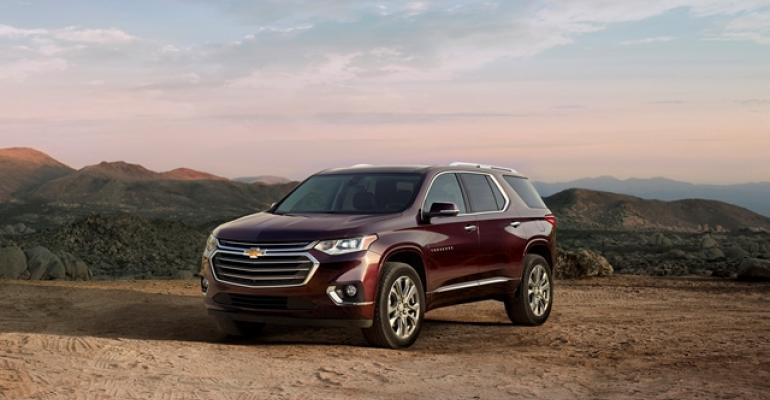 Since it first launched in 2008, the family-favorite has accounted for 837,067 sales. GM expects a similar, if not warmer reception, for the redesigned model.

The new Traverse also receives a 4-cyl. engine for the first time and a newly developed 9-speed automatic transmission, a powertrain combination GM expects will boost efficiency of the big people mover. An updated version of the CUV’s 3.6L V-6 also will be available with the 9-speed gearbox. The CUV will come in 7- or 8-passenger configurations.

“It is going to be a great year for all of our (CUVs) and SUVs,” he says during a sneak peek of the Traverse here recently.

In addition to the redesigned Traverse, which arrives at U.S. dealers in the coming months, Chevy also launches the slightly smaller redesigned Equinox CUV this year and the compact Trax CUV just received a facelift. Last year, the Trax sold nearly 80,000 units for a 25.4% gain on like-2015.

The all-new Bolt battery-electric vehicle, a compact CUV with a range of 238 miles (383 km) hit the market in December.

On the SUV side, GM continues to dominate the top end of the market with offering such as the Tahoe and Suburban, which together control 50% of their segment and enjoy brisk demand amid low gasoline prices.

But the Traverse headlines the Chevy stand at the Detroit auto show this morning. Since it first launched in 2008, the family-favorite has accounted for 837,067 sales and ranked as the sixth best-seller in the GM lineup last year, according to WardsAuto data. It is the fifth best-selling Chevy model.

The automaker expects a similar, if not warmer reception, for the redesigned model. It resides in the industry’s fifth largest segment and tweaks for ’18 should make it more competitive against longtime sales leaders such as the Jeep Grand Cherokee, Ford Explorer and Toyota Highlander.

“There is runway ahead of us,” says Steve Majoros, director-car and CUV marketing at GM.

Majoros says GM plans to market the Traverse aggressively in 2017, while the addition of sporty RS and luxurious Premiere trims lines should help improve average transaction prices on the CUV that historically have been under the segment average.

Dimensions of the Traverse are similar to the outgoing model, but second-row leg room increases 7%, third-row legroom is up 11% and cargo room grows 17%. It is 362 lbs. (164 kg) lighter than its predecessor with a stiffer body structure for a sturdier ride and sharper handling. It will tow 5,000 lbs. (2,268 kg) and turning radius is a relatively tight 39 ft. (12 m).

The interior of the Traverse is more truck-like, too, with a strong center stack and truck-sized center console.

Last night, GM showed a redesigned GMC Terrain 5-passenger CUV, which comes on the heels of last year’s launch of the redesigned GMC Acadia large CUV. GM also started selling the all-new, 5-passenger Cadillac XT5 luxury CUV in 2016. Buick is expected to soon get a redesign of its large CUV, the Enclave, and has seen good sales from its new Encore compact CUV.