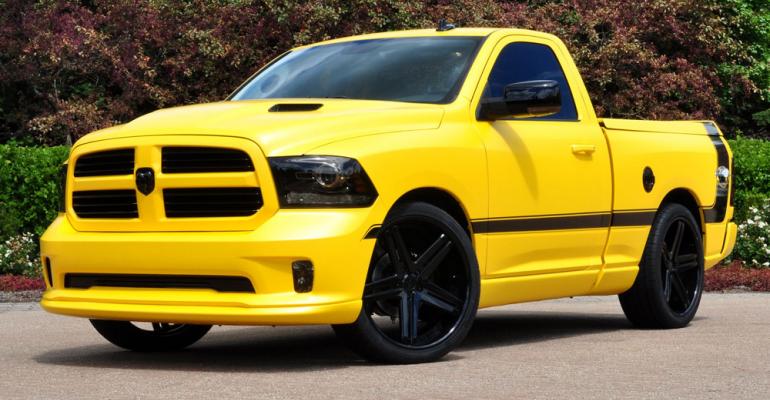 It&rsquo;s not known if the concept is indicative of future production plans, but the highly stylized, top-performance pickup does reflect talk of bringing such a model to market.

Ram takes the wraps off its Rumble Bee Concept pickup, a heavily modified version of its 1500 that invokes the vintage styling of the Dodge Super Bee muscle car of the 1960s.

The bright-yellow truck is being shown to gawkers at the Woodward Dream Cruise classic-car showcase in suburban Detroit. Among its exterior features are Mopar-provided accents, including a tonneau cover and fender flares; 24-in. (60.9 cm) black-gloss wheels, hood vents, tailpipes, fuel door and badging; and a black stripe on each side.

Interior highlights include an amber-encased bee inside a honeycomb-patterned rotary gear shift and black-and-yellow mesh seating.

The Rumble Bee is powered by Chrysler’s 5.7L Hemi that cranks out 395 hp and 407 lb.-ft. (552 Nm) of torque mated to an 8-speed transmission. An interior control allows a potential driver to bypass the dual exhaust system to pump out extra engine growl.

Chrysler doesn’t say in its release whether the Rumble Bee is indicative of future production, but engineers have spoken openly of bringing highly stylized, top-performance pickups to market.

Ford has seen success with its Raptor-trim pickup, assembled alongside its high-volume F-150. Chrysler engineers have said such production of a topline Ram pickup is under investigation.

For now, the Rumble Bee joins a string of special-edition Ram pickups, including the Lil Red Express, Warlock and Power Wagon.

“There’s a lot of energy surrounding concept trucks and buzz models, and the Ram Design Team revels in creating something that is unique for our customers to enjoy,” Ram President and CEO Reid Bigland says in a news release.