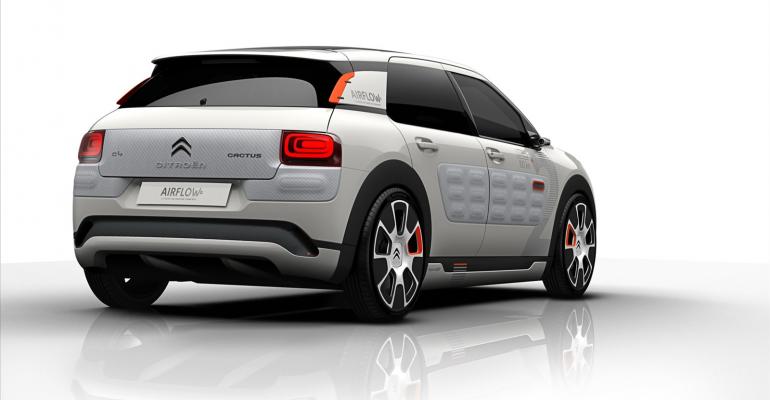 The outstanding fuel economy comes from a unique hybrid powertrain that uses air instead of electricity. The technology combines a 3-cyl. PureTech gasoline engine with a compressed-air energy-storage unit that powers the automatic transmission.

TURIN – The Paris auto show will provide the stage for French automakers’ achievements under the government’s New Industry Plan introduced in 2013.

PSA Peugeot Citroen chose the all-new Citroen C4 Cactus as the laboratory on wheels to showcase its efforts to reach that goal, with the cooperation of French suppliers such as Saint-Gobain (auto glass), Faurecia (seats), Michelin (tires) and Continental (brake systems).

The production car offers an excellent platform to start from. With the latest-generation Euro 6 engines, the C4 Cactus already ranks among the best in its segment with carbon-dioxide emissions as low as 82 g/km and fuel consumption starting at 91 mpg (2.6 L/100 km). The improvements have resulted in the C4 Cactus Airflow 2L Concept, a practical family car that meets the government’s 118-mpg target.

The outstanding fuel economy comes from a unique hybrid powertrain that uses air instead of electricity. Introduced by PSA in January 2013 and featured on a Citroen C3 at the 2013 Geneva auto show, the technology combines a 3-cyl. PureTech gasoline engine with a compressed-air energy-storage unit. The air powers a hydraulic pump/motor unit mated to an automatic transmission with an epicyclic gear train, controlled by a dedicated electronic-management system.

As with a plug-in hybrid-electric vehicle, the Hybrid Air system works autonomously or in combination with the gasoline engine.

PSA says the concept weighs 1,900 lbs. (865 kg), 220 lbs. (100 kg) lighter than the production C4 Cactus through the use of lightweight materials including carbon fiber, aluminum, high-yield steels, composite materials and, for the panoramic sunroof, translucent polycarbonate.

Air resistance is minimized with variable-geometry components that help improve aerodynamics 20%. These include a front bumper with three air intakes that continuously adjust for engine cooling as well as regulating air flow, mobile side deflectors added to guide the air flow around the vehicle and wheels with mobile shutters activated and controlled by centrifugal force.

The concept is fitted with a new generation of 19-in. ultra-low-rolling resistance tires. The conventional door mirrors are replaced by smaller, slimmer rearview cameras. Existing front and rear lights are replaced by LED light modules at the front and rear replace the existing lights. Consuming little power, these new modules save energy and benefit fuel economy.

Other benefits result from the multi-material vehicle substructure which has been entirely streamlined so air smoothly flows underneath the car. The composite structural parts require assembly techniques never before used in the automotive industry.

At the show Citroen will use different colors to identify the components and the materials which diffentiate the Airflow 2L from the production C4 Cactus. Orange, for example, identifies the aerodynamic features and underlines the high-tech character of the concept.