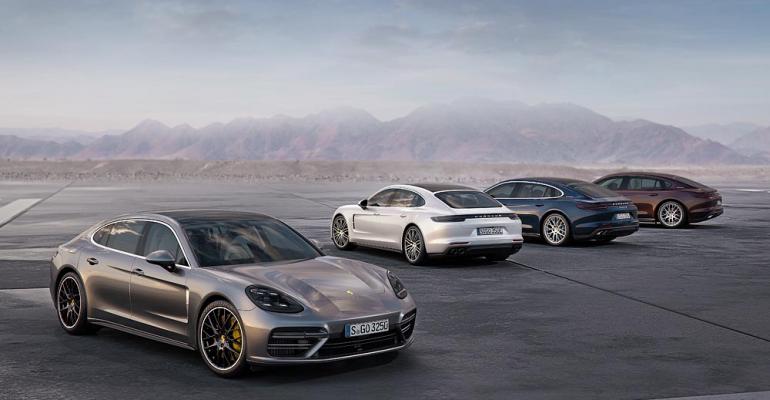 STUTTGART, Germany – Porsche adds six new models to the second-generation Panamera lineup as production of the 5-door liftback ramps up at the automaker’s Leipzig manufacturing plant following its introduction earlier this year.

The new Panamera models make their public premiere at next week’s Los Angeles auto show ahead of North American deliveries starting in 2017.

In the standard-wheelbase Panamera models, the new V-6, which forms part of a new range of units developed in an engineering joint venture between Porsche and Audi, is claimed to provide fuel savings of up to 3.0 mpg (1.3 km/L) over its predecessor under European test conditions, although official consumption figures are yet to be revealed.

Farther up the range, with similar dimensions, is the  Panamera 4S Executive running a more highly tuned twin-turbocharged 2.9L V-6 version of the joint-venture Porsche/Audi engine with 434 hp and the Panamera Turbo Executive fitted with a 542-hp twin-turbo 4.0L V-8.

Also available is the Panamera 4 E-Hybrid Executive. It runs Porsche’s twin-turbo 2.9L V-6 engine in combination with an electric motor mounted in the front of the new Porsche’s standard 8-speed automatic gearbox for an overall output of 456 hp.

As an option, the all new-for-ʼ17 Panamera Executive models are available with a newly developed rear center console. It can be equipped with two integrated folding tables and an antenna connection for smartphones.

The new center console is offered alongside the latest generation of Porsche’s rear-seat entertainment system. It includes removable two 10.1-in. (25.6-cm) tablet-style monitors set within the backrests of the front seats.