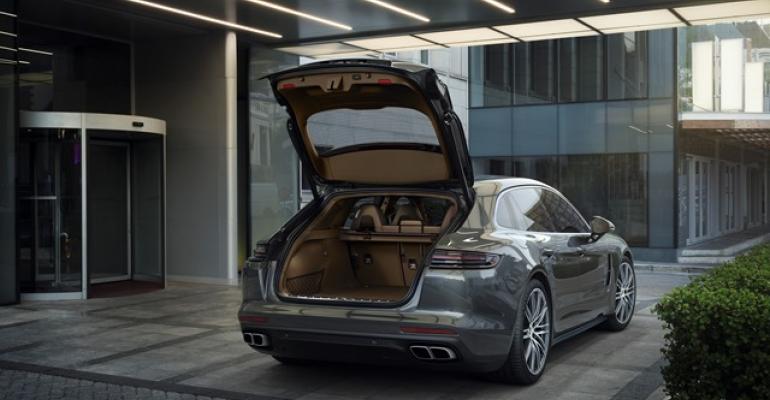 Porsche’s Panamera Sport Turismo, which makes its public debut next week at the Geneva auto show, is set to reach North American dealers in November.

The new sporting estate brings an added degree of practicality to the second-generation Panamera lineup, with a new 4+1 seating layout, large electronically operated tailgate, significantly lower loading floor and an added cu.-ft. (20 L) of luggage capacity behind the rear seats than its liftback sibling.

The new Panamera model was given the greenlight for production by former Porsche Chairman Matthias Mueller after the earlier Sport Turismo concept car unveiled at the 2012 Paris auto show drew positive reviews.

Five years on, the first official photographs of the production version of the Sport Turismo reveal it holds true to the concept, with a uniquely styled rear end that provides it with greater interior flexibility and load space than the existing liftback. Porsche hopes the model will win over buyers otherwise who may have opted for a more conventional wagon from rival automakers.

The visual differences between the standard Panamera and the new Panamera Sport Turismo begin at the B-pillars, with a longer roof that extends rearward with less rake. The rear doors have been modified to accommodate a larger glass area. The D-pillar is appreciably more upright, while the rear fenders are modified accordingly.

At the rear, the new tailgate retains the same width as the liftback’s, but its increased height allows for a much larger opening, which is set lower, at bumper level, to ease cargo loading.

A complex active spoiler mounted atop the tailgate enhances aerodynamics. It deploys in three stages depending on speed and/or driving mode, generating additional downforce of up to 110 lbs. (50 kg) at the rear axle.

When the Sport Turismo’s optional panoramic sliding roof is opened, the spoiler automatically is set to a position of 26 degrees to help minimize wind noise.

“The Panamera Sport Turismo is a step forwards into a new market segment, but it retains all of the values and attributes characteristic of Porsche,” says Michael Mauer, head of Porsche’s design operations.

The new car is the first Panamera offering seating for up to three in the rear, rather than just two as with the liftback. The two fullsize individual rear outer seats are accompanied by a narrow and raised central rear seat, boosting overall accommodation to five, though the limited legroom really makes the center seat suitable only for children.

Nevertheless, Porsche claims the added 0.2 ins. of roof height and less tumble home to the rear glass not only provides for improved entry and exit to the rear over the liftback but also makes for greater headroom for rear-seat passengers.

A luggage-compartment-management system is among a long list of options available for the new Porsche model. It uses two rails integrated into the floor of the cargo area, four lashing points and a partition net to secure items.

At launch, the Panamera Sport Turismo will be offered in five different model variants: the Panamera 4, Panamera 4S, Panamera 4S Diesel, Panamera 4 E-Hybrid and Panamera Turbo – all of which are planned to be on display at the Geneva auto show, which opens its doors to the public March 8.

The sole diesel model at launch is the Panamera 4S Diesel Sport Turismo, which receives a turbocharged 4.0L V-8 rated at 416 hp. It is joined by the Panamera 4 E-Hybrid, whose driveline combines a 325-hp turbocharged 2.9L V-6 gasoline engine and a 134-hp electric motor mounted within the front section of the gearbox.