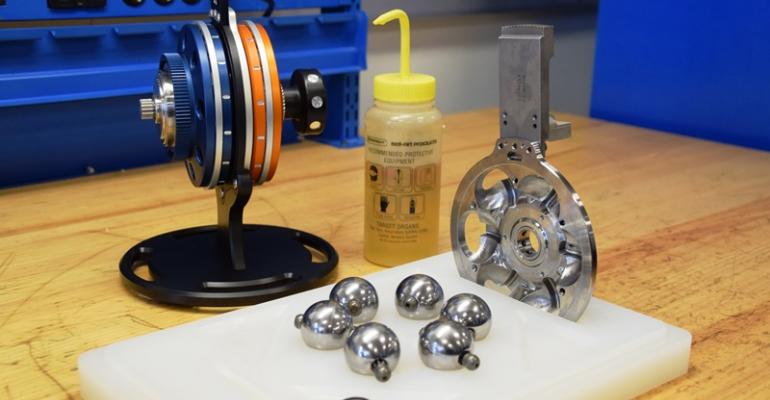 Dana is counting on its new continuously variable planetary transmission technology to convince automakers to make the switch from gears to spheres.

CEDAR PARK, TX – Dana, a company with a long history in driveline expertise, has developed a new automotive transmission technology that fits within existing housings, is scalable from subcompacts to pickups and is up to 10% more fuel-efficient than conventional CVTs.

Dana’s VariGlide is a continuously variable planetary transmission that requires no belts or pulleys, eliminating the annoying “rubber-banding” effect of conventional CVTs.

Instead, VariGlide employs a unique planetary variator that transfers torque to the downstream driveline components. The speed ratio is electronically controlled using electric or hydraulic actuation.

Dana has been developing the technology at a tech center here for five years and expects to have it in production by 2020, perhaps with multiple customers, Ed Greif, Dana’s senior director-powertrain innovations, tells WardsAuto.

The enabling principle for VariGlide dates to 1490, when Leonardo da Vinci conceptualized a device that could constantly adjust gear ratios and transmit torque steplessly, much like today’s CVTs.

The VariGlide variator consists of a series of planets surrounding a sun gear sandwiched between two carriers and a set of rings on each side, one to receive engine torque and the other to pass it on down the driveline.

The planets look like ball bearings, and they spin on their own dedicated axles. They are held in place and controlled by the two carriers, and the axle passing through each planet is constrained by slots in each carrier.

One of the carriers is held stationary, while the other is allowed to pivot up to 7 degrees in either direction. As the driver steps on the accelerator, the system responds by pivoting one of the carriers, which changes the orientation of the planets relative to the input and output rings.

This ingenious design results in an inverse relationship within the variator: As the driver accelerates and decelerates, the planets rotate, transferring the desired torque while the system forces the planet axles to pivot up and down within the carriers like a see-saw, depending on the relative speed ratio requirements.

When the driver is cruising at a steady speed, the engine and transmission are running at optimum efficiency as controlled by the variator speed ratio.

A key enabler of the VariGlide technology is the elastrohydrodynamic lubrication properties of the traction fluid, which momentarily solidifies under high pressures, enabling the transfer of torque through the traction rings and planets.

Greif says the VariGlide-equipped transmissions could replace existing CVTs where the variator would be located after the torque converter in front of the planetary gearset and output shaft.

Sexton says multi-mode configurations are possible. Torque can be applied during a mode shift for maximum smoothness, and if desired, simulated shifts can be calibrated to replicate the feel of an 8-speed or 10-speed transmission, he says.

Another selling point: Unlike conventional CVTs, Dana’s VariGlide technology is compatible with many rear-wheel-drive vehicle architectures.

Today’s CVT is considered the benchmark for efficiency, but Dana says VariGlide has the potential to reduce fuel consumption between 3% and 10%. As global emissions regulations ramp up, Dana is hoping automakers and transmission producers will recognize VariGlide as an important tool to help with compliance.

The company purchased a RWD Cadillac ATS and replaced the manual transmission with a 2-mode VariGlide unit for technology demonstration purposes. Several potential customers have driven it. Dana now is developing a 4-mode VariGlide transmission to demonstrate even better fuel economy and drivability.

In a short test drive on Dana’s property at its tech center here, the variator allows the ATS to accelerate and decelerate smoothly without the familiar whiny surging inherent with many current CVTs.

Touch the gas pedal and the prototype car lurches slightly. A Dana engineer says that is not because of the transmission but instead the car’s launch-control system, which came from the factory with the manual transmission.

Other than that initial sensation, the VariGlide is exactly what a transmission should be: unnoticed by the driver and capable of quickly and efficiently responding to every throttle input, no matter how subtle or abrupt.

In a wide-open throttle test from a standstill, the ATS sprints capably and sends torque to the wheels with no discernible “shift” in gears. Acceleration is linear. Track testing in Texas had the ATS reaching 105 mph (169 km/h).

Greif says he hopes VariGlide will arrive just in time to join what Dana expects will be a global surge in popularity for fuel-saving CVTs.

Like U.S. consumers, Asian customers are warming to them, and about 40% of new-car buyers in Japan are opting for CVTs. In Europe, fixed-gear manual and automatic transmissions have dominated for decades, but some CVT-equipped vehicles, such as the redesigned Nissan Murano, are finding favor in parts of Europe, Sexton says.

WardsAuto’s forecasting partner, AutoForecast Solutions, projects global CVT take-rates will rise modestly from 13% currently to about 16% by 2024, with most of that growth coming in the Asia-Pacific region.

In the U.S., take-rates for CVTs may have reached a plateau after rising steadily the past 15 years as hybrid-electric vehicles such as the Toyota Prius have become more popular.

Da Vinci may have sketched the first rudimentary CVT, but it was a Texas company, Fallbrook, that advanced the modern research into a planetary configuration that could accommodate multiple machines, from fork lifts and recreational vehicles to wind turbines and semi-trailers.

In paying homage to the Renaissance artist and inventor, Fallbrook markets the technology under the NuVinci brand name, which has been commercialized in bicycles and e-bikes.

Since 2012, Dana has been one of several companies licensing the NuVinci technology for various market applications. Dana’s focus is light vehicles, while Allison has the exclusive license for applications in large commercial vehicles; TEAM Industries is the partner for recreational vehicles; and German supplier Continental is applying the transmission technology to e-bikes.

Dana has 20 patents for VariGlide, with 121 more in the pending pipeline. At the tech center here, near Austin, Dana has 37 engineers and technicians working exclusively on VariGlide development and applications.

Greif says Dana has capacity to manufacture VariGlide in high volumes but also is prepared to set up plants near OEM customers.

The current third-generation VariGlide is production-ready and represents significant improvements in performance and weight reduction over earlier iterations, and cost has come down dramatically.

“I feel we are better than parity,” Sexton says, when asked if VariGlide can be priced to compete with conventional CVTs. “With one customer, we achieved the cost target set forth. And usually the cost targets are fairly aggressive.”

Dana recorded $6 billion in 2015 sales, and 41% of it was dedicated to light-vehicle driveline systems, such as axles and propshafts.