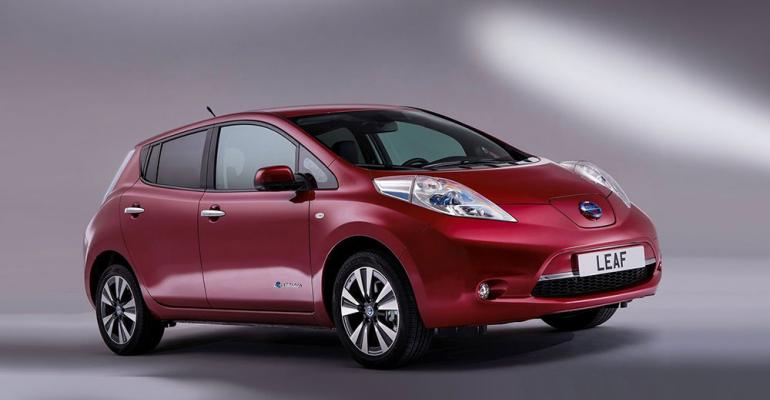 Extending the Nissan electric vehicle&rsquo;s range and improving the ability of its owners to charge while on the go are two areas of improvement.

NASHVILLE, TN – Nissan is offering replacement battery packs for its Leaf electric vehicle as it looks to overcome obstacles to ownership with the car’s current and future generations.

Leaf owners can purchase a replacement lithium-ion pack for their car for $5,499 at Nissan dealers in the U.S.

Later this year, Nissan will allow Leaf owners to finance a new pack for $100 per month, a scheme the Japanese automaker already supports in Europe.

While no Leafs need a replacement pack just yet, a top Nissan official says the ability to buy one is one way the automaker is improving the desirability of the car.

“What we’re trying to do is get rid of the (ownership) obstacles, one after the other,” Pierre Loing, vice president-product planning for Nissan North America, says here in an interview.

While the Leaf is the best-selling EV in the U.S. so far this year, its volume remains a fraction of similarly sized vehicles with internal-combustion engines.

Loing cites too little range and a lack of infrastructure as the top obstacles to people being comfortable with a Leaf purchase, because “as soon as you put people in the car I don’t know anybody who says, ‘No, I don’t like it,’” he says.

Nissan likely will offer variously sized battery packs for the next Leaf in the ’17 model year in the U.S., similar to Tesla’s Model S, which offers buyers the choice of a 60-kWh Li-ion pack or an 85-kWh pack.

“We’ll have solutions to significantly increase the range, which comes with different battery packs,” Loing says.

Last year, Nissan Executive Vice President Andy Palmer reportedly said a 125-mile (200-km) range was in the cards, possibly for the current generation of the Leaf.

Improving the ability of Leaf owners to charge is another hurdle Nissan is trying to overcome.

The automaker plans to double the number of 480V “quick chargers” available in the U.S. and recently announced a “No Charge to Charge” program, giving Leaf owners 24 months of complimentary charging at stations owned by five different providers in select areas of the U.S.

Other things that could improve the Leaf ownership experience prove harder to do in the U.S. than other regions of the world.

For instance, in France Leaf owners can put their car on a train if they need it for a long journey. However, with most American Leaf owners also having an ICE vehicle parked in their driveway, the necessity of a similar scheme is questionable, Loing says.

Something not in the cards anytime soon for the Nissan EV is a variety of body styles.

“If you ask me – there is another body style: It’s an LCV, it’s an e-NV200,” Loing jokes of the electrified version of Nissan’s small light-commercial van available overseas, which uses Leaf technology.

He doesn’t get specific on how long buyers may have to wait for a Leaf body style different from a hatchback, but points out Toyota took almost 15 years to market a differently configured Prius.

The first-generation Prius hybrid went on sale in Japan in 1997 but it wasn’t until 2011 that Toyota debuted the Prius V wagon in the U.S. and Japan.

A smaller Prius, the Prius C subcompact, debuted in 2012.

Leaf sales through June tallied 12,736, up 29.4% from the same period year-ago, WardsAuto data shows. Total worldwide sales since the car went on sale in December 2010 stand at roughly 120,000 units.

Loing says Nissan has been surprised by the EV owners’ fervor, and how much they know.

“People are extremely knowledgeable, sometimes more than us,” he laughs. “They’re also critical of an issue very quickly.”

Nissan experienced this two years ago when Leafs in hot-weather states such as Arizona and Nevada began to see battery degradation faster than what was expected.

Owners of affected models took to Internet forums and social media to voice their displeasure, prompting Nissan to meet with some of them and eventually offer an extended warranty. The warranty covers repair or replacement of a Li-ion battery pack that loses more than three of its 12 bars, or roughly 30% of its capacity, in five years or 60,000 miles (96,561 km).