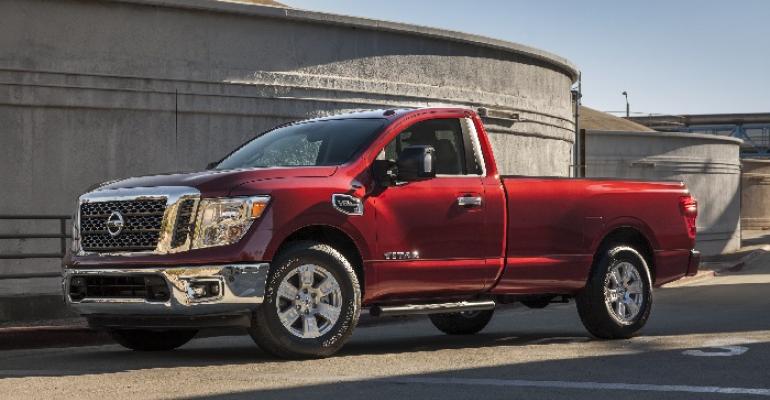 The single cab will be available in the three-quarter-ton Titan XD or half-ton Titan configurations. Both have the same cab dimensions, plus an 8-ft. bed.

Nissan sees the body style, the first of its kind for the Titan lineup, as a means of gaining entry into the commercial and fleet-truck side of the business.

“There’s a lot of pull from dealers to get into work trucks,” Rich Miller, director-product planning for trucks at Nissan North America, tells WardsAuto at an unveiling here. “That’s why we pushed it ahead of the king cab. Our dealers have been clamoring to get this truck out.”

The single cab will help round out the second-generation Titan’s lineup, which presently includes the crew-cab body style. Due next year is the king-cab variant.

The single-cab Titan will offer the same engine choices as the crew cab: a 310-hp 5.0L V-8 turbodiesel from Cummins or Nissan’s own 390-hp 5.6L gasoline V-8. A gasoline V-6 will be available later.

The single cab will come outfitted in the S or SV grades of the Titan, as Nissan believes those buying a truck for work use will not want or need the features of the higher-end trims such as the Platinum Reserve grade.

Nissan expects 15% of annual Titan builds be the single-cab model. That places the Japanese automaker in the middle of existing domestic competition.

The Japanese automaker aims to sell 100,000 Titans per year in the U.S. Sales remain well off that pace though, tallying 6,099 units through June, up 0.8% vs. year-ago. The Ford F-Series is the leader in WardsAuto’s Large Pickup segment in the first half, with 366,057 sales.

Nissan North America’s Light Commercial Vehicle division also is eager to get the single-cab Titan in the market, as some of its existing customers who own Nissan’s NV vans have been asking for a pickup.

“Those customers have told us, ‛We like your vans but we need to buy some trucks, and we don’t want to go to different dealerships,’” Miller says, adding the LCV group’s commercial-vehicle account managers will be a one-stop shop for businesses large and small.