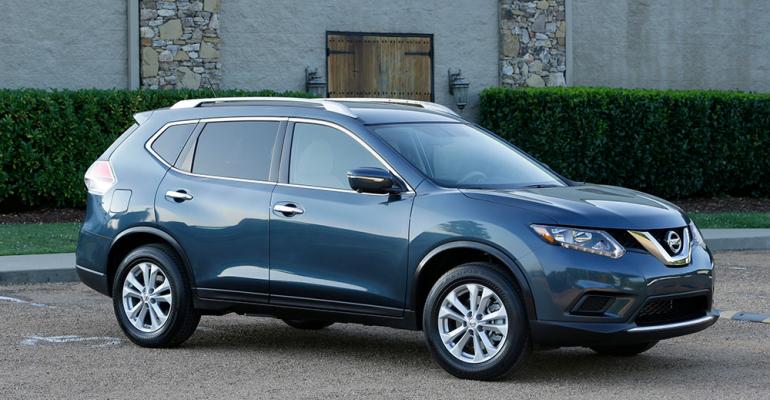 The new Rogue has more upscale features compared with the outgoing model, including higher-grade interior materials and a redesigned exterior.

NASHVILLE, TN – Nissan says its all-new ’14 Rogue is positioned to grab a bigger portion of the expanding midsize CUV segment.

“Most (competitors) have had major refreshes in the last 18 months or so,” Scott Shirley, chief marketing manager, says during a recent media backgrounder here. “We’re quite confident this new Rogue puts us at the head of the class. And the good news there is we’ll stay there for the foreseeable future, because there are no other significant changes coming.”

The Rogue ranks fifth in the Middle CUV segment, as defined by WardsAuto, behind the Honda CR-V, Ford Escape, Toyota RAV4 and Chevrolet Equinox. The segment was up 10.2% to 2,201,857 deliveries last year, and through October it has increased 16.4%.

Shirley says the segment should continue to grow, but likely not at the torrid pace of the past five years.

“It will start to plateau a bit, but it’s been one of the fastest-growing segments the past few years,” he says.

He expects the Rogue to attract more men, with buyers split more evenly than for the outgoing model, which skewed toward women.

Shirley says the Rogue has the second-highest loyalty of the entire Nissan lineup behind the Altima sedan. Those expected returning customers are key to driving up the CUV’s segment share.

Nissan was able to offer a number of upgrades in the new Rogue by using the automaker’s Common Module Family architecture, which allows it to leverage economies of scale and improve quality by sharing modules with other vehicles.

Upgrades include an optional third row that allows the Rogue to seat seven passengers.

The CUV also gets a standard “Divide-N-Hide” cargo system offering 18 different configurations, including out-of-sight storage areas and a lower deck for taller items.

The redesigned Rogue’s exterior features short front and rear overhangs, giving it what Nissan calls a sporty and confident appearance.

The coefficient of drag has been reduced 10% vs. the outgoing model to 0.33 cd by optimizing the A-pillar and outside mirror shapes, which also helps reduce wind noise, Nissan says.

Another new addition is “Quick Comfort” heated seats, which rapidly warm body parts most sensitive to heat, such as the thighs and hips.

Shirley says despite all the upgrades, Nissan wanted to keep the price below most of its competitors. The new Rogue starts at $22,490 for FWD models and $23,840 for AWD vehicles. Prices don’t include an $850 destination and delivery charge.

Most of the marketing dollars for the new Rogue will be directed toward popular primetime network TV shows, as well as sporting events, including college and pro football games.

“It’s the biggest audience you can reach, male or female,” he says. “So there is a balance with sports.”

The Rogue spots also will be shown before feature films at movie theaters and a social-media campaign will be rolled out at a later date, Shirley says, though it won’t play a major part in marketing efforts.

“Social media is good for targeting consumers, but this is such a big segment,” he says.