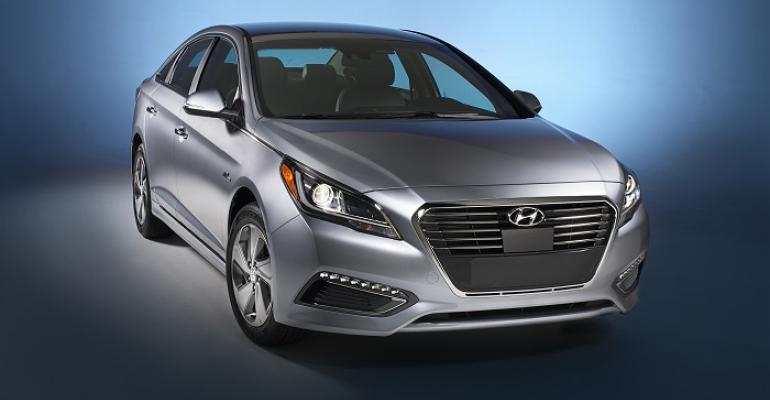 Hyundai claims a 10% fuel-economy improvement with its Sonata hybrid, while the new Sonata plug-in hybrid will have better range than Accord, Fusion.

The first is a next-generation version of the Sonata Hybrid, which Hyundai says delivers 10% better fuel economy than the ’15 model, at 42 mpg (5.6 L/100 km) in combined driving, thanks to upgraded powertrain components including a more powerful electric motor and a larger lithium-ion battery pack.

Packaging efficiencies achieved with the new hybrid include a flat trunk floor. In the old model, the pack intruded on trunk space. The achievement gives the car best-in-class passenger volume, Hyundai says, also touting best-in-class cargo volume of 13.3 cu.-ft. (377 L), a 10% rise over the ’15 Sonata Hybrid.

All-new to the Sonata lineup is Hyundai’s first-ever plug-in hybrid model, which the automaker says has a range of 22 miles (35 km) on electric power.

The Honda Accord PHEV has an electric range of 13 miles (21 km), while the Ford Fusion Energi can travel up to 19 miles (31 km) solely on electric power.

The Sonata PHEV has the same 2.0L GDI engine and 6-speed automatic as the Sonata Hybrid, but a larger, 50-kW (67-hp) electric motor.

Total system output is 202 hp and the car can recharge in 2.5 hours with a 240V Level 2 charger, matching the Fusion Energi’s time but higher than the Accord PHEV’s 1-hour fill-up time.

It takes the Sonata Hybrid 5 hours to recharge on a 120V outlet, in between the Accord PHEV (3 hours) and the Fusion Energi (7 hours).

Hyundai expects the Sonata PHEV to deliver 93 MPGe in EV mode based on internal estimates. The Accord PHEV delivers 115 MPGe and the Fusion Energi 88 MPGe.

Both the hybrid and PHEV Sonatas get a variety of design updates from the standard Sonata, although, Hyundai points out, they are functional. The midsize sedan has received criticism its appearance is too staid from the previous-generation Sonata’s.

From pictures, the PHEV’s grille appears taller, and with a large horizontal black bar at the bottom.

Hyundai says the changes improve the Hybrid and PHEV’s coefficient of drag to 0.24, the same rating as the Tesla Model S.

Both new Hyundais get a host of standard safety and technology features, including seven airbags, SiriusXM satellite radio and Bluetooth. Navigation is available on both models, and on the plug-in buyers can download a Hyundai Blue Link smartphone app to remotely start their car or schedule charging.

Both cars will be assembled at Hyundai’s Asan, South Korea, plant. The hybrid is set to reach the U.S. early this summer, while the plug-in only will be available in select U.S. markets later this year.