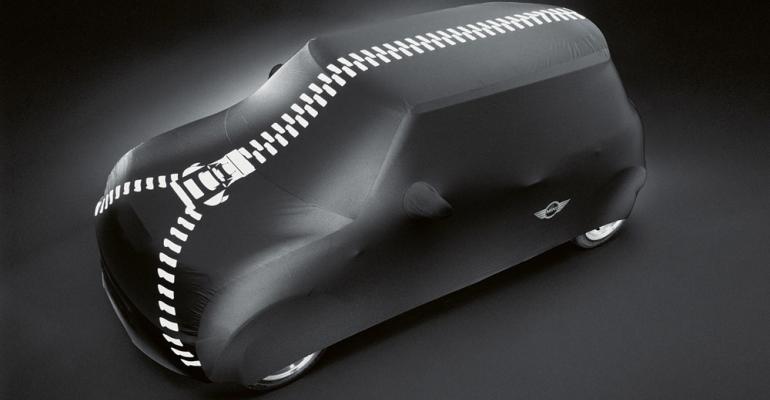 New Mini to Be Revealed at Tokyo, L.A. Shows, Not Frankfurt

The new Mini, which represents the third generation since the re-born brand and model debuted in 2000, goes on sale worldwide in first-quarter 2014.

TURIN – BMW will focus attention on its new i3 electric/hybrid model at the upcoming Frankfurt auto show, shifting the debut of its close in-family rival, the next-generation Mini to Tokyo and Los Angeles.

Although the new Mini was presented to a small group of experts late last month in Munich in near-production form as the Vision concept, the official press launch will take place Nov. 18 in Oxford, U.K., where it is produced.

The chosen date is not a matter of chance, coinciding with the 107th birthday of Alec Issigonis, the creator of the original car.

With the introduction of the Mini in 1959, Issigonis revolutionized the auto industry. A transversely mounted engine, front-wheel drive, wheels set in all four corners and an advanced undercarriage not only delivered unparalleled cabin space for passengers and luggage on a small footprint, but also exceptional driving agility.

The Mini Vision shown in Munich features a new, somewhat revolutionary design language, with much smoother surfaces both front and rear. The many round sections of the current design are more harmonically blended in the concept, and there are more subtle shapes and surfaces, especially along the vehicle’s sides.

Overall the styling moves toward simplicity, although there is not much left of the minimalist approach of Issigonis’ original design.

Although the new Mini appears significantly wider, it is only about 0.8 ins. (20 mm) wider overall, with a narrower greenhouse and roof for maximum aerodynamic efficiency.

Powertrain details haven’t been released, but the new model likely will benefit from sharing its chassis with BMW’s new FWD models. A new 3-cyl. and a hybrid version aimed primarily at China are expected.

Mini designers have spent quite some time in China's main cities researching the expectations of car buyers there, and the new generation clearly will bring some element of the “hip and chic” character of the original Mini that became the must-have, must-drive of movies stars, royalty and members of Parliament, not to mention the Beatles.

Inside, the Vision resembles a spaceship, with a central console that appears to float as if in a zero-gravity environment. Outside it takes full advantage of light-emitting-diode technology, with an outer-ring of LEDs surrounding the headlamp and serving as daytime-running lights.

The new Mini represents the third generation since the reborn brand and model debuted in 2000. It will make its public debut Nov. 20 at the Tokyo and L.A. auto shows and go on sale worldwide in first-quarter 2014.

And Now for Something Completely Different
May 20, 2013