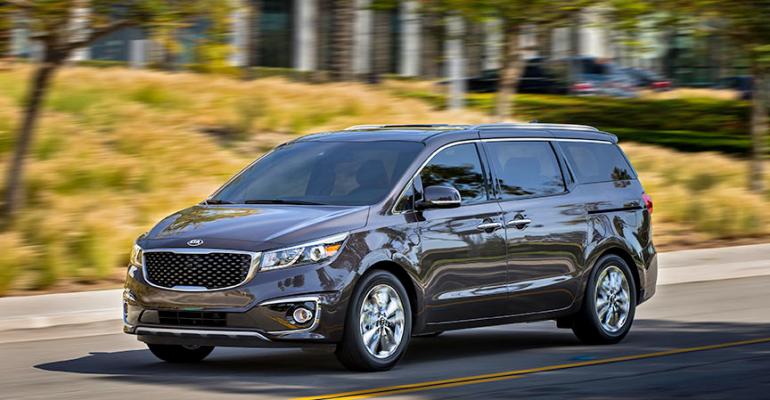 A more powerful engine, second-row seats with flip-up bottom cushions and high-end grade are new for &#39;15.

Kia reveals what it calls the Sedona multipurpose vehicle early, ahead of the model’s debut Thursday at the New York International Auto Show.

Like many minivan sellers before it, Kia tries to move away from that loaded classification with the new MPV designation and a more CUV-like stance.

However, in pictures released today the Sedona still is unmistakably a family hauler.

The newest iteration of the Sedona "transcends mundane functionality," Kia says. A wide stance and a more cab-forward design bring it closer to a CUV than a minivan.

A fully integrated version of Kia's tiger-nose grille is present on the vehicle.

The automaker stretched the outgoing Sedona's wheelbase 1.6 ins. (41 mm) and reduced its front and rear overhangs to further the CUV-like direction.

The windshield is described as "deeply swept," and LED taillights and a standard rear spoiler lend a "broad, stable" look, Kia says.

The height and width of the Sedona are almost unchanged, but there are increases in passenger space, including front shoulder room and legroom in all three rows of seating.

Horizontal design cues give the impression of a wider cabin. Soft-touch materials are employed, and Kia says the MPV will be the only one in its segment to have YES Essentials stain-repelling fabric on its seats.

The front center console of the Sedona is described as unique for its segment but no further detail is given other than it offers generous storage space.

Second-row seats can be had in a lounge configuration, which offers more legroom and retractable lower leg rests.

Some '15 Sedonas will come equipped with second-row heated seat cushions and all grades get a 60/40 split third row that folds into the floor.

A variety of colors and color combinations are available for the Sedona's interior, in shades of beige, gray or burgundy.

Kia's UVO infotainment system is available and introduces new features under the eServices banner, some of them already available on sister-brand Hyundai's models, including geo-fencing and speed alert, which parents can use to set up boundaries for their teenage drivers.

Siri "Eyes Free" and a Google-powered Local Search are available as part of the newest iteration of UVO.

Kia says the new Sedona rides on a chassis that is stiffer than the old Sedona's with 36% more static torsional stiffness than its closest segment competitor.

Ultra-high-strength steel tubes run inside the A-pillars for better distribution of impact loads during a collision.

Ride and handling is improved with the addition of ZF Sachs Amplitude Reactive Dampers, which can quell large and small road inputs.

Wheel-house padding, double-seal sliding doors and greater use of sound-deadening foam in the Sedona's engine compartment should make it one of the quietest models in its segment, Kia claims.

Other powertrain technologies include continuously variable valve timing with a piston-cooling oil jet and low-friction piston rings and skirts, valve tappets and springs and a timing-chain guide.

Taking a cue from the new Hyundai Genesis, the Sedona gets the same hands-free tailgate/trunk opening technology. With the Kia, the tailgate will open automatically within three seconds of detecting the vehicle's key fob in a close proximity.

Other optional convenience features include a 2.1-amp USB charging port and 115V AC outlet, a cooled glovebox and a surround-view monitor that shows real-time camera images from around the vehicle.

The 7- or 8-passenger Sedona goes on sale in the U.S. late in the third quarter or early in the fourth quarter, Kia says.

The Sedona was the last of Kia's U.S. lineup to be revised, with the current generation on sale since early 2006.