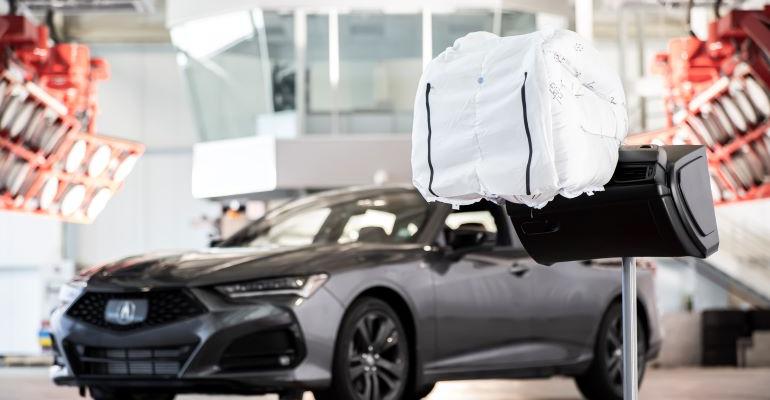 Honda
The new airbag has three inflated chambers, one in the center and two longer bags flanking it.
Technology

Honda confirms its luxury division’s redesigned ’21 Acura TLX is the first model in the Honda-Acura lineup to get a new passenger-side airbag designed to mitigate potential brain injury in front-end angled collisions.

“The TLX is the first vehicle with this technology,” Eric Heitkamp, principal crashworthiness engineer for Honda R&D Americas, says in a phone interview. The redone Acura TLX midsize sedan is scheduled to go on sale in the U.S. market in early fall.

Honda says the new design, co-developed with supplier Autoliv, is the world’s first airbag to take into account updated brain-injury criteria, based on a study led by the U.S. Department of Transportation. Click here to see video of new airbag technology.

Honda says it and Autoliv are making the design available to other automakers.

The airbag has three inflated chambers, one in the center and two longer bags flanking it. The outboard arms are joined by a “sail panel” with “uninflated volume” – that is, just empty space – between it and the center bag.

New elements on the ’21 Acura TLX include a large central floor tunnel made of high-strength steel. It provides greater body stiffness for performance, yet also channels crash forces into and through the tunnel instead of into the passenger compartment, Klein tells Wards.