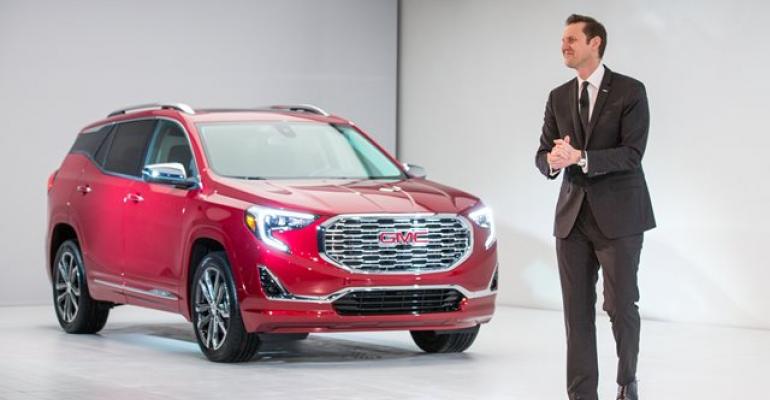 &ldquo;There are some cool slots people in the U.S. have not embraced yet, and we will be there,&rdquo; GM Executive Vice President Mark Reuss says.

DETROIT – Americans can’t get enough of their CUVs and General Motors product development chief Mark Reuss says the automaker will be there to meet them with more of the car-like trucks very soon.

“You’re going to see more in the next year,” Reuss tells WardsAuto after the introduction of the redesigned ’18 GMC Terrain, a 5-passenger CUV that sits under the Acadia large CUV in the brand’s lineup.

Buyers are smitten with CUVs such as the Terrain for their rugged looks, commanding view of the road, cargo-carrying and towing abilities and superior fuel economy relative to their SUV big brothers. According to WardsAuto data, automakers sold 10.6 million CUVs and SUVs last year, up 7.2% from 2015.

GM sold an industry-leading 2.2 million CUVs and SUVs last year and controls a dominant 20.3% of the light-truck market.

The Terrain sold 87,925 units last year, despite riding on a vehicle architecture nearly eight years old and longer in the tooth than just about every competitor in its segment, such as the Honda CR-V, Nissan Murano and Ford Edge. It has sold more than 750,000 copies since its introduction.

But Reuss suggests GM’s plans go beyond the Chevy Traverse large CUV slated to take the stage here tomorrow. Or even the Buick Enclave large CUV expected later this year.

He hints new CUVs from GM will fit into segments, or perhaps sub-segments, U.S. buyers have not yet seen. He declines to elaborate, but cites the automaker’s red-hot midsize pickups as one example of giving consumers something they had not considered before.

“There are some cool slots people in the U.S. have not embraced yet, and we will be there with it,” says Reuss, executive vice president-Global Product Development, Purchasing and Supply Chain at GM.

At the same time, Reuss says GM intends to be agile in responding to buyer trends and not put too many chips into the CUV game.

“We don’t want to be tied to one thing for profitability,” he says.

GM certainly has high hopes for the new Terrain, which is expected to continue playing a major role in advancing the GMC brand because it is the least expensive model it sells but still carries the premium GMC appeal.

“GMC’s strong growth over the past decade is due in large part to Terrain,” says Duncan Aldred, vice president-global sales and marketing at GMC. “The all-new Terrain builds on that success, leveraging GMC’s proven premium (CUV) experience to shake up the largest vehicle segment, with a strong blend of design, functionality and engineering excellence.”

GMC executives boast of the new model’s stronger, sharper and more sculpted exterior-design elements, as well as its refined and functional interior with available goodies such as a 7-speaker Bose audio system, Apple CarPlay and Android Auto capability, and a suite of advanced safety equipment.

“It is a striking design with functional beauty,” says Helen Emsley, executive director-Global Design at GMC. “There’s confidence and optimism in its stance, with exceptional attention to detail that speaks to GMC’s rise as a premium brand.”

All-new engine choices include a 1.6L turbo-diesel 4-cyl. and a pair of turbo-gasoline mills with displacements of 1.5L and 2.0L, making 170 and 252 hp, respectively. The turbo-diesel is mated to a 6-speed automatic for 137 hp and 240 lb.-ft. (325 Nm) of torque, while the turbo-gas engines get a newly developed 9-speed automatic gearbox specially tuned for each application. Front-wheel-drive is standard and all-wheel-drive is available.