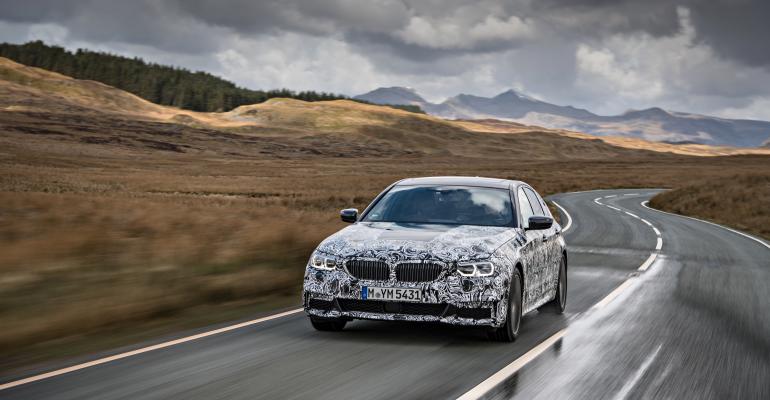 Underneath prototype camouflage lies BMW’s seventh-generation 5-Series sedan, a car described as being new from the ground up and, as it has been since its inception in 1972, crucial to the German automaker’s continued drive for greater volumes, profit and success.

The production version of the new 5-Series, which goes under the internal name G30, won’t be unveiled until October. BMW is holding back on many details until closer to launch.

However, we’ve driven a trio of prototypes over some challenging and less than perfectly groomed roads in the U.K. The drives have provided insight into the 5-Series’ advanced new chassis, which comes with a setup aimed at giving the car more attributes than ever before.

We drove the same coarse blacktop roads Jos van As, head of BMW’s chassis development, and his team have been using to fine-tune the handling attributes of the new executive-class sedan, which will face stiff competition in the form of the Audi A6, Jaguar XF and Mercedes-Benz E-Class when it goes on sale in North America in 2017.

“At one end of the scale we’ve succeeded in making it more responsive and increased its agility, while at the other end it now provides greater comfort and refinement,” van As says.

The new-gen 5-Series has grown, if only slightly. Increases in length, width and height are incremental and mostly aimed at increasing rear-seat accommodation. As before, BMW will build the new car with two distinct wheelbases, including a long wheelbase exclusively for the Chinese market. The prototypes we drove carry over the basic proportions of its predecessor. But while the appearance may be described as evolutionary, some other areas of its design could be labeled revolutionary.

Key to the changes is a new body structure first unveiled on last year’s sixth-generation 7-series. Developed under the working title CLAR (an acronym for “cluster architecture”), it incorporates more aluminum within its floorpan and bulkheads than the platform used by the outgoing sixth-generation 5-Series. It also uses more aluminum castings than the earlier structure.

Although it does without the more expensive carbon-fiber components used by its larger sibling, BMW claims the adoption of the new structure and other weight-saving measures, including a lighter wiring loom, reduces curb weight up to 220 lbs. (100 kg) depending on the model. It also significantly increases the new 5-Series’s torsional rigidity and is the basis for an all-new suspension philosophy.

The new setup, largely mirrored on the upcoming seventh-generation 3-Series, adopts a fully electric steering system both in standard rear-wheel-drive and all-wheel-drive xDrive models. A new mounting system for the steering is claimed to improve the rack’s rigidity and, with it, greater feel and increased feedback.

The new steering system is linked to a completely reworked double-wishbone front suspension that uses a greater number of aluminum components designed to reduce unsprung masses. Due to its inherent design and the fact that its lower arms largely are freed of supporting any lateral forces, BMW says the new setup provides greater feel and feedback through the helm.

At the rear, BMW relies on its traditional 5-link suspension, providing it with new geometry, lighter and stiffer aluminum components and newly developed mounting points. Together, the changes are said to provide more controlled wheel movement and greater refinement through enhanced isolation from irregular and coarse surfaces.

Together with standard steel springs, a revised air suspension will be optional on the new 5-Series. As with the new 7-Series, it now features air springs both at the front and rear, rather than just at the rear as before.

For the first time, BMW will offer the 5-Series with xDrive all-wheel-drive in combination with sport suspension and a 0.4-in. (10-mm) reduction in ride height. The sedan also will offer both xDrive and BMW’s integral active steering. Both are aimed at enhancing the 5-Series’s reputation for dynamic excellence despite its continued increase in size.

As for the engines, BMW’s not yet saying much. Our three prototypes were a 530i sDrive running a turbocharged 2.0L 4-cyl., a 540i sDrive powered by a 3.0L turbo in-line 6-cyl. and a 530d with a turbocharged 3.0L in-line 6-cyl. diesel. Other engines will be available when sales launch in Australia, though we’ll have to wait until the October unveiling of the new 5-Series before the full range is made public.

Before we get too far, a disclosure: as the accompanying pictures indicate, this is a test of series of disguised chassis preproduction prototypes. While running a final-spec mechanical package and clearly indicating the direction the 5-Series has taken, the three models are pilot production examples without the usual quality touches one would expect from a new BMW.

So if it’s too soon to pass definitive judgment on the new 5-Series, BMW’s many changes to the chassis help lift its game in the dynamics department.

We also got to test a number of alternative software maps for the steering in a move that brought to light the difficulties in hitting the right compromise between providing the sort of sporting attributes the 5-Series has become known for down through the years. By adopting what BMW describes as a fully electric setup, engineers simply connected a laptop and altered the steering characteristics while on the move, something van As says has enabled his team to conduct a wider range of tests.

The 5-Series’s new speed-sensitive system improves on the setup used by the outgoing sixth-generation model, delivering greater feel around straightaways, more consistent weighting in the first half-turn of lock and suppressing kickback with greater authority on less-than-smooth surfaces.

This is first-rate steering, endowing the new BMW with great precision, feel and dependability. There’s a superb feeling of balance and fluidity, as well.

The new 5-series can be driven on a winding back road without any qualms about its ability to soak up lateral forces and keep a firm grip, even at high speeds. A new generation of dampers featuring altered valves and faster-acting software ensure roll angles are kept in check even on the standard underpinnings.

The rear-biased apportioning of power of the xDrive all-wheel-drive system keeps the entertainment factor high while adding to the overall feeling of security, especially on damp and undulating roads. While the distribution of drive to both the front and rear wheels previously curtailed some of its steering sensitivity, buyers of the new 5-Series can combine xDrive with the integral rear-wheel-steering system. The combination of instant steering response and first-rate traction results in a car with true sporting handling characteristics.

Mirroring the changes made to the 7-Series, the new 5-Series offers a wider range of driving modes. Next to the Eco Pro, Comfort and Sport settings, the optional Drive Experience function includes a Sport Individual mode, allowing the tailoring of the steering, engine and suspension characteristics to the driver’s liking. Additionally, an Adaptive mode is programmed to automatically adapt the characteristics to the driver’s style, even taking into account routes programmed into the navigation system.

Based on our brief assessment, BMW has managed to bolster the fine dynamic qualities of the 5-Series. The re-engineered seventh-generation model may be larger and better-equipped than its predecessor, but its new lightweight platform and range of significant chassis developments give it outstanding agility and the sort of handling flair to worry the competition.