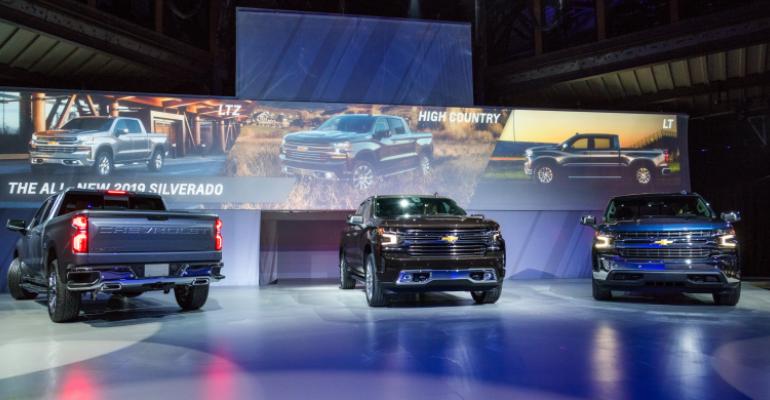 While the automaker has yet to sell an autonomous vehicle, the Silverado accounted for 585,864 deliveries in 2017. It is GM&rsquo;s best-selling vehicle and a goose that has been laying golden eggs for the automaker for 100 years.

DETROIT – General Motors introduces the redesigned ’19 Chevrolet Silverado, a stalwart in the portfolio of an automaker marching to a future where cars drive themselves and big workhorse pickups may play a diminishing role.

“It speaks to the power of General Motors,” GM Chairman and CEO Mary Barra tells WardsAuto after the Silverado’s reveal here on the eve of the 2018 North American International Auto Show.

“We have such technical capability,” she adds. “We have the talent to be working on future, transformative technologies like autonomous vehicles (and) electric vehicles but trucks are very, very important.”

GM entered this year’s show in Detroit by revealing Friday it filed a petition with the U.S. government to deploy a driverless fleet for ride-hailing in 2019. The cars have no steering wheel, nor do they have brake pedals or an accelerator. The news made headlines around the world.

But while GM has yet to sell an autonomous vehicle, the Silverado accounted for 585,864 deliveries last year, up 1.9% from 2016. It is GM’s best-selling vehicle and a goose that has been laying golden eggs for the automaker for 100 years.

GM expects its momentum to continue with the redesigned model, which it says will offer a broader range of models than ever before, as well as greater cargo-carrying capability, heightened durability, better passenger comfort and more fuel-efficient and higher-performance powertrain choices.

GM product development chief Mark Reuss underscores his confidence in the truck by taking a shot at cross-town rival and pickup-selling king Ford, which GM has poked repeatedly in recent years for a decision to go with a lightweight aluminum body and cargo bed. GM sticks with high-strength steel for the new Silverado.

“You won’t get much work done with an aluminum hammer,” he says.

But taking a page from Ford’s playbook, GM also will offer a light-duty diesel in the Silverado. The 3.0L inline turbocharged 6-cyl. joins other diesels in GM’s midsize and heavy-duty pickups. Reuss says extensively redesigned versions of its pushrod 5.3L and 6.2L gasoline V-8s also will be available. The Silverado ushers to market GM's first-ever 10-speed automatic transmission in the pickup segment.

“I’m confident we’ll have the best-performing diesel in the segment,” he says.

Of the 5.3L and 6.2L V-8s, Reuss calls them the “most advanced small-block engines we’ve ever made.” For example, both engines feature fuel-saving cylinder-deactivation technology that can operate the truck with between one and eight cylinders. GM’s previous technology could deactivate four cylinders at a time.

Other highlights of the Silverado include industry-leading cargo volume in every bed length, according to GM, with the short-box version offering 63 cu.-ft. (1,784 L) of space, an improvement of 20% over key competitors; a higher grade of roll-formed, high-strength steel for the bed floor; and 12 fixed tie-downs with twice the strength (550 lbs. [250 kg]) of the previous model.

A class-exclusive power tailgate operated from the key fob, interior button or by hand also will be available.

It continues to employ a live rear axle. “It makes the new Silverado very responsive and fun to drive,” Reuss says.