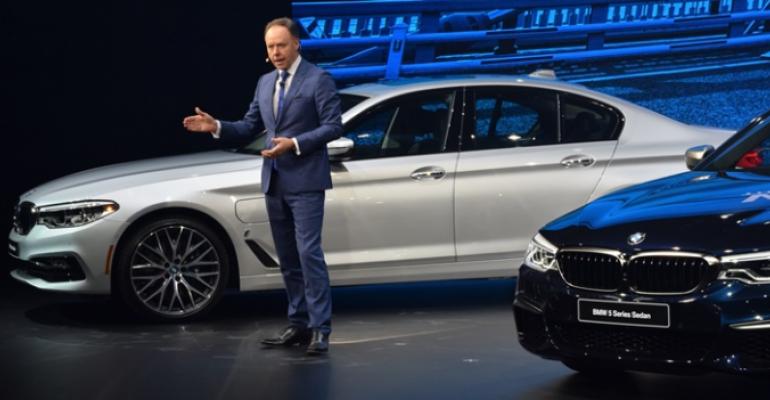 Globally, all BMW Group brands did well in 2016, but the U.S. market has been challenging, with sales of most BMW-brand vehicles falling from the prior year.

DETROIT – The seventh generation of BMW’s popular 5-Series sedan debuts here at the North American International Auto Show as the BMW Group celebrates global 2016 sales of 2.4 million units, with each brand delivering at least 5% more vehicles than the prior year.

BMW Board Member Ian Robertson looks to the brand’s growing pool of fuel-sipping plug-in hybrids and electric vehicles as critical offerings to carry it well into the future.

“BMW Group is the world’s most successful provider of plug-in hybrid vehicles in the premium segment,” Robertson says.

Helping with that goal will be arrival of a plug-in hybrid version of the new 5-Series (530e iPerformance) and Mini Countryman, followed by two new all-electric entries: a Mini in 2019 and BMW X3 in 2020.

“Success of our electrified vehicles shows we are already well on track, and our message is clear,” he says. “We intend to remain at the forefront of electro-mobility.”

With a 2.0L turbocharged 4-cyl. paired to an electric motor for a combined 248 hp, the new PHEV has a powertrain similar to that of the BMW 330e, which performed well during Wards 10 Best Engines testing last fall. BMW says the new 530e is capable of a sprint to 60 mph (97 km/h) in 5.8 seconds.

Robertson says U.S. dealers have sold out their allotment of ’16 5-Series cars, so the new ’17 models should begin moving quickly through showrooms.

Unlike the PHEV and V-8 variants coming in spring, these first models will be marketed as ’18 models, available both with rear- and all-wheel drive.

Also beginning production this spring is the X2 compact “sport-activity coupe,” which is on the show floor here in concept form.