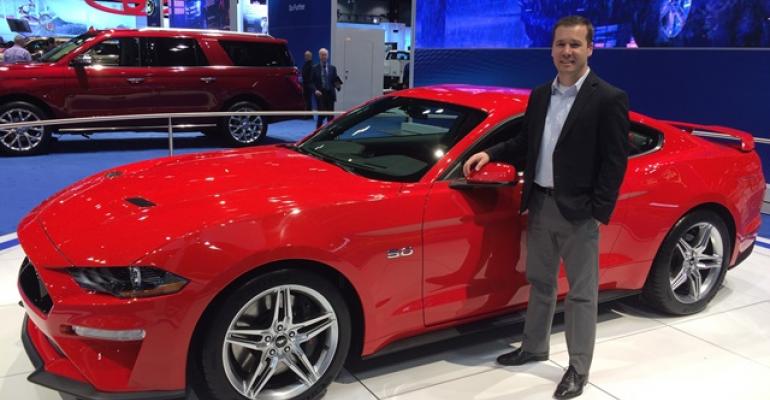 Ford&rsquo;s restyled &rsquo;18 Mustang is garnering mixed reactions, but the company says that&rsquo;s to be expected whenever an icon is reshaped. Overall, Ford says the customer base is diversifying and expanding with Millennials and globally.

CHICAGO – Initial reaction to Ford’s midcycle refresh of the Mustang was mixed, but opinion is turning more positive – especially as potential buyers see the restyled ’18 model in the metal.

“It’s hard to show the car in photos, but people are really excited about it when they see it in person,” Mark Schaller, Mustang marketing manager, says in an interview with WardsAuto on the floor of the Chicago Auto Show.

The Mustang gets a complete makeover from the windshield forward for the ’18 model year, along with upgraded engines and 10-speed automatic transmissions. The restyled front end features all-LED lighting allowing hood height to drop 1 in. (25 mm) overall, giving the pony car an arched-fender and -hood appearance compared with the more angular styling of the sixth-generation Mustang introduced in 2014 as a ’15 model.

Schaller says early reaction to the revisions, unveiled at the Detroit auto show in January, were not unexpected given that every remake of the iconic sports car has been met with some trepidation within the Mustang community.

“People are resistant to change at first,” Schaller notes, “and our designers are pushing the envelope. If they’re not making us a little uncomfortable, they’re not doing their jobs.”

The good news, Schaller says, is the sixth-generation model and the refresh are growing interest in the Mustang among younger and more diverse buyers. At the same time, those newer buyers share many of the same desires – for freedom, an emotional connection, authenticity and a little rebelliousness – with the Baby Boomers that preceded them.

“We’re seeing the torch being passed from Boomers to Millennials,” Schaller says, “but there are a lot of similarities between the groups that span age and gender gaps.”

While cars sales continue to lose ground to CUVs, SUVs and pickups, Schaller expects the segment occupied by the Mustang, Chevrolet Camaro and Dodge Challenger to maintain its 2% share of the market.

Mustang’s North American sales softened during the course of 2016, finishing down 13.4%, but its 105,932 deliveries still topped the Camaro by 33,000 units, according to WardsAuto data. Schaller anticipates the refresh will rejuvenate Mustang sales as each change has in the past.

“Mustang sales are highly driven by new product,” he says.

Mustang sales also are growing globally, thanks to the move to independent rear suspension in the sixth generation. Schaller says global customers will appreciate that the latest makeover assures all Mustangs will come with hood vents, a styling feature previously dropped from some models due to pedestrian crash standards.

Schaller expects a smooth transition from selling off ’17 models and introducing the ’18 this fall, following a midsummer changeover at Ford’s Flat Rock, MI, Assembly Plant.