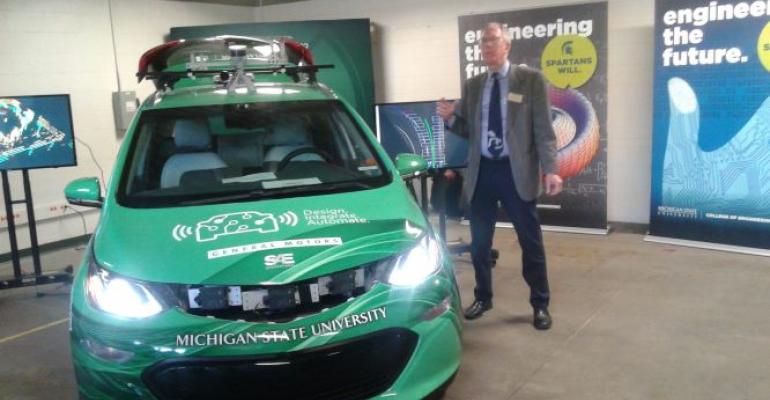 Tom Voice of MSU's College of Engineering with Chevrolet Volt being converted into autonomous vehicle by students.
Vehicles

The university is conducting research which, using artificial intelligence and data stored in the cloud, can help predict human and vehicular behavior to benefit the sophisticated guidance systems needed in autonomous vehicles.

EAST LANSING, MI – With the mobility revolution bearing down on the auto industry, Michigan State University is preparing to turn its entire 5,200-acre (2,100-ha) campus with its 60 miles (96 km) of roadways into a laboratory for tinkering with the future of transportation.

“We’re actually a city of 70,000 highly mobile people,” says Satish Udpa, executive vice president-administrative services, who notes Michigan still is home to the automobile industry. “We want to play a role in helping the industry as it evolves.”

MSU already has set up a course for testing autonomous vehicles in a corner of the sprawling campus known as Spartan Village, where housing for graduate students and junior faculty is gradually being repurposed, Udpa says during a brief tour.

Professors and students – MSU has more than 7,000 engineering students – also are working on the phone apps critical to ride-sharing and navigation through the growing numbers of choices facing travelers, ranging from wider use of public transportation to electrified vehicles as the university installs more charging stations across the campus.

The university is conducting research in areas such as computer vision, modeling and visualization (below, left) which, using artificial intelligence and data stored in the cloud, can help predict human and vehicular behavior to benefit the sophisticated guidance systems needed in autonomous vehicles.

“Sensing, controlling and perception all combine to give a vehicle situational awareness,” notes Leo Kempel, dean of MSU’s College of Engineering and one of the growing number of faculty members involved in the mobility project.

“MSU’s campus is unrivaled in scope, size and diverse mobility environments, providing an ideal testing ground and validation site,” he says. “Studying mobility on football or basketball game days, for example, will provide great insights on solutions for safely and efficiently navigating through densely crowded areas.”

This means MSU isn’t interested only in the hardware and software involved with the mobility revolution. Transportation requires social interaction and the introduction of new technology can reshape behavior. For example, if riders aren’t driving, they’ll likely consume more media from different sources, says Prabu David, dean of the College of Communications Arts and Sciences.

MSU’s ambitious program encompasses multiple aspects of the revolution in transport, including the sensors that serve as building blocks for the hardware required to support not only autonomous vehicles but also the infrastructure that will enable AVs and traditional vehicles to coexist on roadways in the future.

MSU has embedded sensors on the Mackinac Bridge to monitor conditions on the span connecting Michigan’s Upper and Lower Peninsulas. Sensors could have detected the minute cracks that ultimately led to the fatal 2007 collapse of the Interstate 35w Bridge across the Mississippi River in Minneapolis, says Nizar Lajnef, assistant professor of civil and environmental engineering.

The legal challenges of the mobility ecosystem also require attention, adds Nicholas Wittner, a professor in MSU’s College of Law. Product liability already is a major issue, but regulation in Michigan is flexible and is tilted in favor of innovation because of its long history with the automobile industry, he says.

Shelia Cotten, a MSU sociologist studying autonomous vehicles, says while there is concern about the disruptive nature of AVs, job losses among the nation's 3.8 million truck drivers should be relatively modest. The nation’s 1 million taxi drivers have more to fear as car sharing and ride sharing take hold, she says.

Udpa stresses that MSU is not trying to match or rival the University of Michigan, which also has been conducting extensive research on autonomous vehicles with a variety of partners. Instead, they complement each other in many ways, he says.