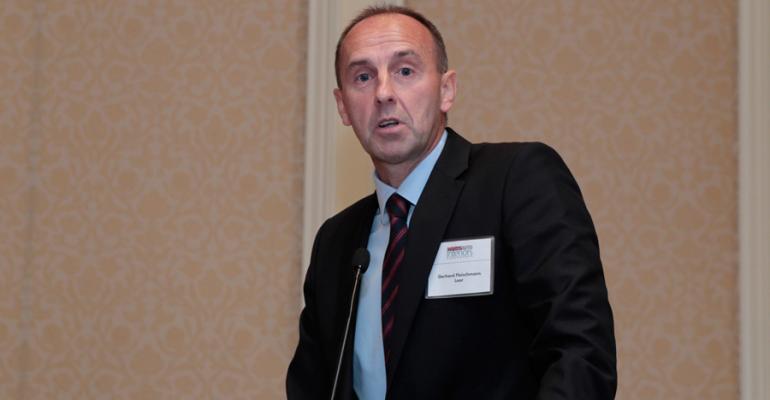 <p> <strong>Lear&#39;s Fleischmann predicts home computer-generated interior illumination that can be downloaded with special software to user&rsquo;s car is wave of the future. </strong></p>
Vehicles

Using LIN, designers can achieve more uniformity with their lighting designs. Ambient lighting needs to fit a particular&nbsp;interior color, as some lighting schemes may be too intense in a beige interior but just right for a cabin shaded black.

DEARBORN, MI – Interior illumination has come a long way in vehicles over the years, from the simple dome in the center of the ceiling to the mood lighting of today using light-emitting diodes in acrylic light pipes.

But what if consumers could choose their own lighting scheme using their home computers?

That's just one of the ideas presented by industry experts participating in the "Taking Ambient Lighting to the Next Level" panel at the 2012 WardsAuto Interiors Conference here.

Lear executive Gerhard Fleischmann predicts home computer-generated interior illumination that can be downloaded with special software to the user’s car is the wave of the future.

Controlling a vehicle’s interior lighting through a user’s local interconnect network, or LIN, also is seen by Fleischmann, as well as Federal-Mogul's Ralf Meyer-Wendt, as a future innovation.

LIN eliminates pulse-width moderators, or PWMs, by using an embedded microcontroller for the LED instead of a series of wires.

By using LIN, designers can achieve more uniformity with their lighting designs. Typically, a designer must tune ambient lighting to fit a particular interior color, as some lighting schemes may be too intense in a beige interior but just right for a cabin shaded black, Meyer-Wendt says.

He touts Federal-Mogul's chameleon chrome-type material as a future ambient lighting innovation as well. "It has a chrome look by day and (serves) as ambient interior lighting by night," he says.

The metal-look finish is achieved using a special coating process, Meyer says, not wanting to give away trade secrets. European auto makers say, "If it looks like metal, it should feel like metal," so Federal-Mogul has spent significant time on the daytime appearance and feel of the trim material.

Organic LEDS, or OLEDs, are viewed as the most-significant innovation to come in automotive ambient interior lighting. This "opens up a whole new canvas for designers and suppliers," says Brian Pospy, automotive business-development manager for 3M.

The flat, film-like OLEDs, formed using a paste, give "more freedom to put ideas into effect," Fleischmann says. Suddenly large swaths of a vehicle interior, such as a dash, can be lit.

He expects the technology to be introduced in the next five years, telling WardsAuto that suppliers first need to increase their capacity for the product before production can begin.

Due to the limited supply base for OLEDs, Fleischmann says they are 30% more expensive than conventional LEDs.

Meyer-Wendt cautions that designers at OEMs and suppliers may need to rein themselves in. He sees government regulation down the road, particularly on distracting ambient lighting such as speakers that pulse light to the beat of a song.