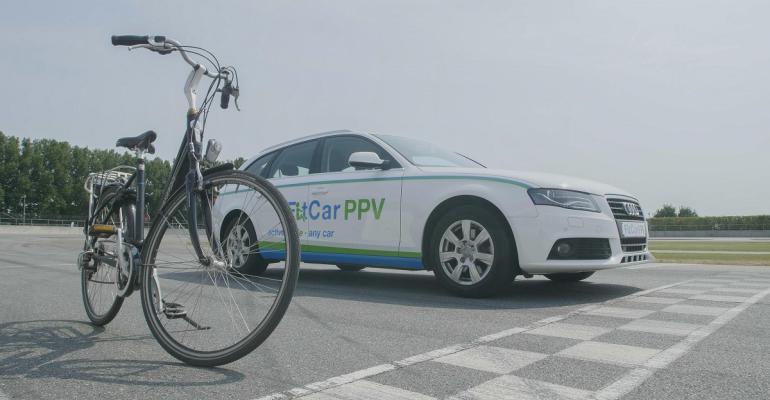 The FitCar PPV is powered as normal, delivering manufacturer-specification performance and economy, but is governed by an active pedaling motion instead of the conventional depressing of the accelerator.

A Dutch engineering firm claims its modifications to an everyday car will help the driver get fitter.

BPO of Delft in The Netherlands says its FitCar PPV is the world’s first car that can actively enhance personal fitness.

The brainchild of Saudi inventor Nasser Al Shawaf, the car is based on a standard Audi A4 Avant 2.0L gasoline TFSI automatic, with the throttle replaced by a bicycle-pedal mechanism and mated to a flywheel, which generates an electronic pulse to engage the accelerator.

The car is powered as normal, delivering manufacturer-specification performance and economy, but governed by an active pedaling motion instead of the conventional depressing of the accelerator.

To make space for the bicycle and flywheel mechanism, the brake pedal has been replaced with a simple, off-the-shelf hand control conversion as used in mobility vehicles for the disabled. The makers claim this modification will work equally well with internal-combustion or battery-electric vehicles.

There are three driving modes, including Drive Slow for congested urban traffic, Drive Fast for highway speeds and No Drive for when stuck in stationary traffic but with the ability to continue exercising by using the pedals. A rotary dial on the pedals adjusts the resistance, depending on how intense the driver wants to make the physical exercise.

“I work in many cities around the world where a 60-minute-plus car commute each way, each day is not uncommon,” Al Shawaf says. “This is an unhealthy way to waste more than two hours every day. So I came up with the idea of the FitCar, which does exactly the same as any conventional car getting us safely and comfortably from A to B. However, in the FitCar you can exercise while you drive.”

BPO founder and managing director Oscar Brocades Zaalberg adds, “Our ambition is for the technology to be either adopted by a car manufacturer for a new generation of ‘healthier’ city cars, or for us simply to offer it as a conversion kit in the aftermarket – for those wishing to add PPV as an optional active extra to their car.”

FitCar PPV is patented internationally and is awaiting approval in the Netherlands for road use across Europe.