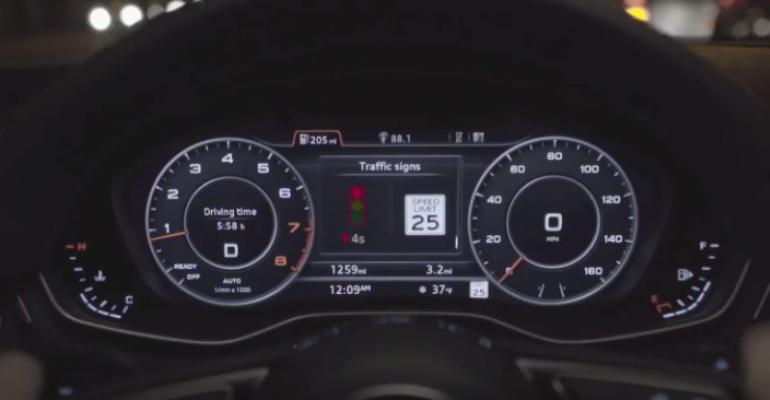 Communicating how vehicle-to-vehicle and vehicle-to-infrastructure technology will improve the lives of city dwellers will be keys to its acceptance, panelists at an automotive technology conference say.

NOVI, MI – The future autonomous world is discussed often here at TU-Automotive Detroit 2017, but for it to come to fruition numerous infrastructure projects must take place.

And that may be a tough sell to residents who only want their city to keep streets illuminated and garbage picked up.

“Saying you’re investing x-millions of dollars in (dedicated short-range communication) is not a message residents in most cities (are waiting to hear),” Mark de la Vergne, chief of mobility innovation-City of Detroit says on an urban mobility panel at the conference June 7. “How this gets communicated outside of rooms like these is challenging.

“It is a foreign (concept) in a lot of cities where catching the bus and making sure you’re home for your kids is the No.1 priority,” he continues. “Wondering about autonomous vehicles and DSRC is literally nothing that is close to being on your radar.”

De la Vergne advises cities to start thinking about how to communicate the merits of smart mobility, which includes a future where vehicles communicate with each other and the infrastructure.

John Barney, vice president-transportation sector for Ericsson, points out Audi’s Traffic Light Information is a good way of showing skeptical taxpayers a real-world technology that could benefit their lives. The vehicle-to-infrastructure technology is on some ’17 Audi A4, allroad and Q7 models sold in Las Vegas. The vehicles, via onboard 4G LTE, receive information from the city’s traffic-management systems and through an in-vehicle display tell drivers how much time remains until a red light changes to green.

“It’s out there (and) it’s easy to point to and helps explain why we’re doing some of these things in a way a non-telematics person will understand,” Barney says.

Audi has said it hopes to go beyond the time-to-green feature and use traffic-management system data in the U.S. to predict the best travel speed to “maximize the number of green lights one can make in a sequence.”

Barney says any infrastructure improvements municipalities are making should be with a future smart world in mind. For instance, he says Ericsson and Philips created a streetlight with hidden small cells for high-speed broadband.

“When you start planning and putting in that infrastructure like streetlights, think about, ‘How can I leverage this piece of infrastructure more so than just as a light?’” Barney says. “It may be a small cell (or) a pollution detector going into that. So you start to build (infrastructure) without it being a big bang (to taxpayers) when you get there.”

All panelists emphasize the need for the public and private sectors to become partners, rather than for the latter to engage in the hard sell.

Any tech company looking to interface with a city’s mobility leadership should be able to show how its technology will improve residents’ lives, says Grayson Brulte, co-chair of Beverly Hills, CA’s Autonomous Vehicle Task Force and a member of the city’s Smart City/Technology committee. “Don’t just say we have the best widget or the best (artificial intelligence),” he says. What can you do to improve (residents’ lives) and how can the mayor and the elected officials go out and sell it to the city of how it’s going to improve (residents’ lives)?”

Says Zipcar’s Justin Holmes, “I spent more of my career in the public sector than the private sector. I used to say stop sending sales people to me.”

From the point of view of Zipcar, the oldest car-sharing service in the U.S. originating in 2000, Holmes, director-corporate communications and public policy, says cities now and in the future best can help the cause of smart mobility by giving car-sharing services access to curb space and right-of-way.

“We partner with cities all around the country to have about 1,000 dedicated parking locations…in a highly visible curb-side location,” Holmes says. “And that’s important for cities because Zipcar’s role and cities are incredibly aligned. Every car we put on the road takes away the need for up to 13 personally owned vehicles. And so that level of investment in curb space is completely aligned with the cities’ vision to help reduce reliance on exclusively personally owned vehicles.”

But Holmes says investment in existing infrastructure is more of a short-term goal.

“Fast forward to the long term, and cities are going to play a larger role as these arbiters of public spaces, particularly with regards to right-of-way, in ways we have not yet imagined,” he says.

The Big Story: Inside the Autonomous Vehicle
May 22, 2017