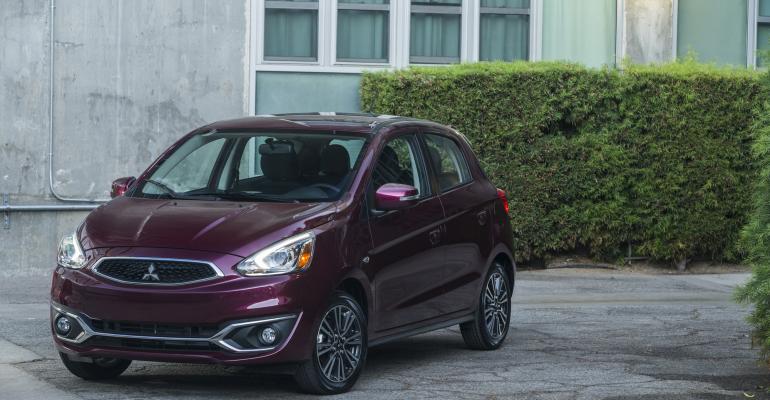 Both vehicles get new faces and improved interior fabrics, while the Mirage sees a slight bump in horsepower and better handling.

The subcompact hatchback, which has exceeded Mitsubishi’s own internal sales expectations, gets a thorough workover for ’17, with a revised hood, grille, front and rear bumpers, rear spoiler and new-look wheels.

Styling changes also improve aerodynamics, with Mitsubishi now quoting a 0.27 coefficient of drag vs. 0.28 with the ’16 model.

Interior updates to the ’17 model, which goes on sale in spring 2016 in the U.S., include new seat fabric and a changed gauge cluster, steering wheel and shift panel.

Apple CarPlay and Android Auto, allowing drivers and passengers to reproduce some smartphone apps on the car’s LCD screen, will be available as part of a new 300-watt Rockford Fosgate audio system.

Shock absorbers get a new spring rate and damping force to improve the subcompact’s handling; a stiffer front end improves both handling and stability, Mitsubishi says.

Front brake discs grow in size, as do rear drums, and the brake pad/shoe material is changed to improve stopping distance.

“The improvements to the 2017 model year will expand the Mirage’s appeal even more,” Don Swearingen, executive vice president-Mitsubishi Motors North America, says in a statement.

While that may seem like a small figure, especially in relation to the roughly 120,000 Nissan Versas delivered in the States this year, the Mirage has bested the automaker’s own internal goals.

The Outlander Sport is the brand’s No.1 U.S. seller, with 30,655 deliveries through October, and receives many of the same exterior and interior changes as the Mirage.

The model also will get new power-folding side mirrors with LED turn indicators, an auto-dimming rearview mirror with HomeLink technology, new wheel-lip moldings and 18-in. alloy wheels.

Inside the CUV is a redesigned steering wheel, a new 6.1-in. (15-cm) display audio screen and new seat fabrics. A light-gray interior option also is added.

Mitsubishi Aims to Get on Radar With 100 Spokespeople Campaign
Jun 04, 2015