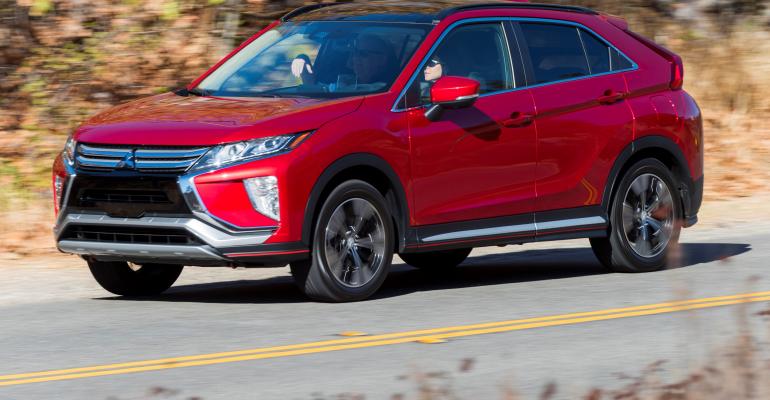 TOKYO – There were no surprises at last autumn’s Tokyo auto show as Mitsubishi repackaged three core characteristics of its model lineup – SUVs, plug-in hybrids and all-wheel drive – with the tagline, “Drive your ambition.”

Of the three, all-wheel drive and particularly its S-AWC or Super All-Wheel Control technology has set Mitsubishi apart from many of its competitors.

S-AWC, first installed in the Lancer Evolution in 2007, is offered on the Eclipse Cross and Outlander models. The Eclipse Cross system is an upgrade from the Outlander’s S-AWC, which itself has gone through an iteration since debuting in 2009.

A two-motor version of the technology, developed for the Outlander PHEV, will be upgraded later this year when the automaker introduces the plug-in hybrid’s ʼ19 model.

Kaoru Sawase, chief technology engineer in Mitsubishi’s EV powertrain engineering division, explains torque is longitudinally distributed between front and rear wheels, both left and right as needed, through an electronically controlled coupler with “clever activation of the car’s brakes.”

He adds, “The biggest benefit from all-wheel drive is safety, followed by driving fun and driving confidence.”

At present, 42% of Mitsubishi cars and trucks, including 0.66L minicars, are fitted with AWD systems, the majority still employing mechanical couplers from suppliers such as GKN and JTEKT.

In the next 10 years, Mitsubishi hopes to raise the share to 60%, although the target still is under discussion. “The share of SUVs is growing around the world. And that should result in an increase in all-wheel-drive sales and share,” Sawase says.

Two years ago, Mitsubishi predicted the fullsize SUV market would grow nearly 20% through 2020 while the compact CUV/SUV segment would expand 60%.

The biggest growth market for all-wheel drive? “At the moment, China,” Sawase says, “because all-wheel-drive sales in China are currently small.”

A potential customer? Nissan, the automaker’s largest shareholder and development partner since October 2016.

“It is under discussion,” Sawase says, adding S-AWC could be adopted by Nissan’s E-Power lineup. He declines to offer a timeframe. Sawase thinks the Outlander PHEV’s system is the most advanced among hybrids currently on the market including Toyota’s Prius and new RAV4 hybrid, and several other models sold mainly in Japan.

The new Outlander PHEV system produces 60 kW of power – torque to the rear wheels –  compared with 5 kW for the Prius and an estimated 9 kW for the ʼ18 RAV4.

At the Geneva auto show in February, Mitsubishi displayed a three-motor AWD system in the Mitsubishi e-Evolution Concept. The timeframe for bringing the technology to market is 5-10 years.

Meanwhile, Toyota has developed two new all-wheel-drive systems, one for standard gasoline-engine cars and a second for hybrids.

The gasoline-engine version is called Dynamic Torque Vectoring and independently distributes torque to the left and right rear wheels based on driving conditions. Toyota claims the system, which employs a ratchet-type dog clutch on both front- and rear-wheel shafts, offers excellent off-road performance.

For hybrids, Toyota improved its “E-Four” system (called AWD-i in the U.S.), increasing torque to rear wheels 30% over the existing system.

The new systems will be deployed in cars, commercial vehicles and hybrids. Toyota initially will use the new systems in eight models. By 2023, it plans to expand the technology to 28 models, which by then will account for 70% of Toyota AWD sales.

Toyota forecasts global AWD vehicle production will grow to 20 million units in 2025, up from an estimated 16 million in 2017.